From spinning heads to Satanic Cujos, the premiere of The Exorcist conjured up pretty much everything you’d expect from a series version of the classic movie. (Well, no pea soup — yet.) But did the Fox drama possess enough thrills to keep you coming back for more? Let’s review the set-up, then you can grade the hour below and hit the comments to add your critique to ours.

OUR FATHER | Early on, we met Father Tomas (Alfonso Herrera), a Chicago priest who sermonizes at St. Anthony’s with enough sex appeal and charisma to be under contract at The CW. When not deflecting his sister’s questions about why he’s been corresponding with his married old flame — by sneaky snail mail, no less! — he offered counsel to parishioner Angela Rance (Geena Davis), who had drawn the wholly logical conclusion that teen daughter Kat (Brianne Howey) wasn’t just sulking because a friend had died. She was sulking because she was possessed by a demon. And no, Angela isn’t crazy, she hastened to add. She couldn’t be, because, as she noted, she has 400 employees. (In that case… !) When Father Tomas finally gave up trying to explain that demons weren’t real and agreed to meet with Kat, whad’ya know? A crow committed suicide by flying smack into the window. (Was it an omen? No, wait — that’s a different show/film.) 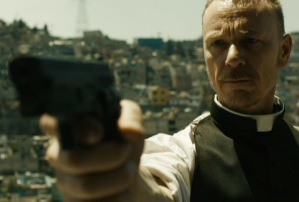 ‘BEYOND PROTOCOL’ | Meanwhile, in Mexico City, renegade exorcist Father Marcus (Ben Daniels) was being chewed out on behalf of the Vatican by a Father Bennett (Kurt Egyiawan) for going incommunicado for nearly a month. Mind you, that turned out to be “pleasantries” compared to what followed. When Father Bennett saw that not only had Father Marcus failed to cast out the demon in young Gabriel, but that the boy looked practically dead, the latter priest pulled a gun on the former to prevent him from taking the little devil to the hospital. And, make no mistake, Father Marcus would shoot. “Without hesitation,” he added. Later, as the exorcist resumed his work on the moppet, Father Tomas curiously witnessed everything as if he was in the room with them.

DINNER AND A SHOW | When Father Tomas visited the Rance home to do his best Reverend TimTom with Kat, the girl assured him — and pretty convincingly, too — that she wasn’t possessed. Her mom had simply gone mental because the teen had “liked [her] friend’s stupid Wiccan craft store on Facebook.” Over meatloaf with the family, the priest tried in vain to strike up a conversation with Angela’s husband Henry (Alan Ruck), who was suffering from some cognitive impairment that Kat cruelly suggested had turned him into “basically a potato.” After Father Tomas put the brat in her place, Henry experienced what seemed to be a moment of lucidity, telling him where to find St. Aquinas — and Father Marcus. And pfft! In a flash, the moment passed as if it had never happened.

IT TAKES TWO? | Following another vision of Father Marcus’ exorcism of Gabriel — this one featuring the demon striking the priest and snapping the boy’s neck! — Father Tomas tracked down his peer at St. Aquinas. After awkwardly making the acquaintance of blind (?) Brother Simon (Francis Guinan) — whose freaky eyes resembled Gabriel’s — Father Tomas confessed to Father Marcus that he’d “seen” his efforts with the youngster. Once convinced that Father Tomas was on the level, Father Marcus warned him that he was being manipulated by otherworldly forces. Worse, “they’re gonna love you.” That evening, Father Tomas confided in Angela that he’d never heard God calling him to be a priest. But he did think God had called him to help her family. Right on cue, they heard a noise upstairs. Way upstairs. 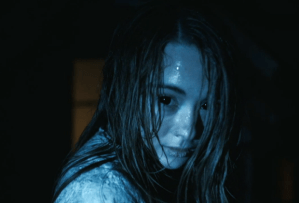 COULD IT BE… SATAN?!? | In the attic, Father Tomas expected to find Kat. Instead, the creepy girl who killed a rat and scared the bejesus out of him was her sweet little sister, Casey (Hannah Kasulka). Of course, as soon as Angela made it up the stairs, her younger daughter didn’t look or behave like she was possessed anymore. All she did was suggest that they put out some traps for the vermin, since “don’t they say where there’s one, there’s probably a whole bunch?” (See also: Cinemax’s Outcast.) Finally, as Father Tomas disposed of the rat’s body outside, “Tubular Bells” (chilling as ever!) began playing, and Casey smiled from the window. Game on.

So what did you think of the premiere? Grade it below, then hit the comments with your review.