It’s always nice to catch up with the Pfeffermans, isn’t it? The family at the center of Amazon’s Transparent is woefully messed up — and was long before dad Mort became mom Maura. But their flaws are achingly relatable, and sharply observed by creator Jill Soloway and company. Season 3 (available to stream Friday) feels like a family reunion of sorts: Sure, you might hear some stories you’ve heard a hundred times already, but you’re still glad to see everyone’s face again.

The premiere finds Maura (Jeffrey Tambor, fresh off a second Emmy win) enjoying the afterglow of her new relationship with Vicki (Anjelica Huston) and volunteering at an LGBT suicide hotline. But something’s still not right: “Why am I so unhappy?” she asks Vicki (and herself). When a suicidal transgender teen hangs up on her, Maura runs out to look for her and suffers a health crisis that inspires her to take the next step in her transition: gender-confirmation surgery.

Can we take a moment and discuss just how amazing Jeffrey Tambor is? With The Larry Sanders Show, Arrested Development, and now Transparent, he’s been a vital part of three landmark TV shows. Maura doesn’t have much in common at all with Hank Kingsley or George Bluth (the height, maybe), but Tambor’s dry wit and openhearted vulnerability shine through and help anchor this show that, with a lesser actor in the lead, might get lost in L.A. hipster navel-gazing. 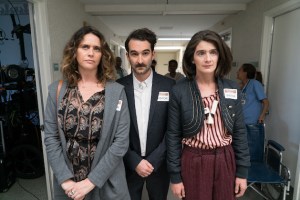 Since the Season 3 premiere just focuses on Maura, I did miss the rest of the Pfeffermans. But we catch up with them in Episode 2, and they’re mostly where we left them. Ex-wife Shelly (Judith Light) has discovered social media. (“I’m a brand!”) Ali (Gaby Hoffmann) is still seeing much older professor Leslie (Cherry Jones) and tentatively approaching something like monogamy. Josh (Jay Duplass), still mourning his split from rabbi Raquel (Kathryn Hahn), is hit with another gut-wrenching loss. And Sarah (Amy Landecker) is forming a friendship with Raquel while exploring her S&M tendencies.

All of this is enjoyable enough to watch, and every frame of the show is impeccably shot and scored. (Note to my loved ones: Please play Dustin O’Halloran’s hauntingly gorgeous piano theme on a loop at my funeral.) But honestly, it’s nothing we haven’t already seen. Season 3 lacks a certain narrative drive that the previous two seasons had, as if it’s enough to just hang out and observe these characters without any major new developments. And it mostly is — but still, there’s something missing. Transparent has always reminded me of one of those Sundance indie films about a colorfully dysfunctional family. Season 3, while a pleasure, feels like a perhaps unnecessary sequel.

That said, the new season does contain at least one flat-out fantastic installment: Episode 3, “To Sardines and Back,” where the Pfefferman clan gathers for Maura’s birthday. Maura shocks her family with a (very flattering!) new haircut and the news that she’s undergoing surgery to become a woman… and now wants to be called “Mom.” The family’s wide range of emotional reactions to Maura’s announcement, and the poignant flashbacks of a beloved turtle named Nacho, are Transparent at its very best: defiantly offbeat, and yet oddly familiar.

THE TVLINE BOTTOM LINE: There’s not much new to report in Season 3, but time with the Pfeffermans is always time well spent.