At this rate, Elizabeth Keen might actually miss being dead.

Ever since she was “resurrected” from last season’s tragic “death,” The Blacklist‘s leading lady has only continued to encounter the very heartache, violence and betrayal she was trying to escape. And Thursday’s Season 4 premiere was no different.

A quick reminder of where the NBC drama left things in May: Red, deep into the process of tracking down longtime rival Alexander Kirk, learned that Liz had faked her own death (and, even worse, Mr. Kaplan spearheaded the entire ruse). Meanwhile, Liz fled to Cuba to start a new life away from Red — but just when Tom and Agnes joined her in the Pearl of the Antilles, Kirk and his men showed up and kidnapped all three of ’em.

There was also this tiiiiiny little detail about Kirk being Liz’s father. Or so he said.

When Thursday’s premiere begins, very little time has passed since the events of last spring’s finale. Red is desperate to find Liz (and livid at Mr. Kaplan). Tom and Agnes are being driven who-knows-where by a pair of captors. And Liz, still reeling over her potential relationship to Kirk, is holed up in a house with him and his security team.

What follows during the next hour is the ultimate cat-and-mouse game. Red, Mr. Kaplan and Dembe attempt to find Liz… but when they do, they’re forced to flee the scene before getting killed. Tom tries to get himself and Agnes rescued by the Cuban authorities… but when a local cop attempts to pull over and arrest Tom’s captors, the criminals manage to get away with the police officer unconscious in the trunk of their car. Basically, anything that can go wrong does go wrong — especially for the unlucky Kirk associate who gets decapitated in the episode’s first minutes. 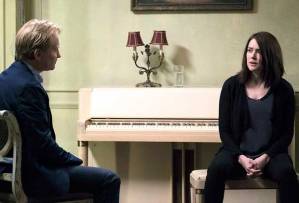 Instead of making your head spin with the minutiae, I’ll just relay the highlights from “Esteban (No. 79)”:

* In an attempt to earn Liz’s trust, Kirk once again insists he’s her dad, this time with some more details. He and Katarina Rostova were happily married years ago, until she had a brief affair with Red — and Kirk was legitimately worried that Katarina’s baby might actually belong to Red. But Kirk is now completely certain that he is indeed Liz’s father, and he would have raised her in a safe, loving home if Red hadn’t swooped in one night and taken Liz from her family.

* Once the FBI gets word of Liz’s “alive” status, the task force is furious that Liz lied to them after all they’d done to help her. But Cooper encourages the team to put their anger aside and help Liz out of her latest life-or-death sitch — but Samar is the only one who can’t overcome her bitterness.

* After a complicated rescue mission involving a U.S. Marshal, a trip to Cuba and a man with no eyes (long story!), here’s where we stand: Tom manages to gun down his captor and flee the scene in a stolen pickup truck, ensuring Kirk that “an army is coming” for him.

Liz, despite her best attempts to escape from Kirk and his men, is re-captured on the beach and forced into an airplane that takes off just seconds before Red arrives to save her. But at least Mr. Kaplan is able to rescue Agnes from the adversaries. That’s great! Right?

Wrong. Because moments later, as Mr. Kaplan and Red drive away from Kirk’s house with Agnes safely in tow, another car careens through the trees and T-bones their vehicle. Red is knocked unconscious and Mr. Kaplan is barely lucid — but Agnes is perfectly fine, and Mr. Kaplan watches helplessly as one of Kirk’s men scoops up the baby from the backseat and walks off with her.

The Blacklist fans, I leave it to you. What did you think of the Season 4 premiere? Grade it in our poll below, then hit the comments to back up your choice!