If you already have a healthy distrust of cable news, Thursday’s series premiere of Notorious — which is keeping Scandal‘s timeslot warm until the drama returns midseason — likely did very little to quell your suspicions.

Inspired by the real-life relationship between celebrity attorney Mark Geragos and Larry King Live producer Wendy Walker, the ABC drama purports to give audiences a behind-the-scenes look at how criminal lawyers work with the media to sway public opinion about their clients. In the case of Notorious, it’s producer/all-around “tough-ass bitch” Julia George (played Piper Perabo) and shady lawyer Jake Gregorian (Daniel Sunjata) shaping the news — and telling the public exactly how to feel about it.

The big story in Thursday’s premiere — which will continue to unfold as the season continues — revolved around the fatal hit-and-run of a teenage boy believed to have been mowed down by millionaire tech wiz Oscar Keaton (Kevin Zegers). It was eventually revealed that Oscar’s wife Sarah was actually the one driving the car that killed the teen, but just when the police were closing in, she turned up dead on her bathroom floor. (Dun, dun, dun!) 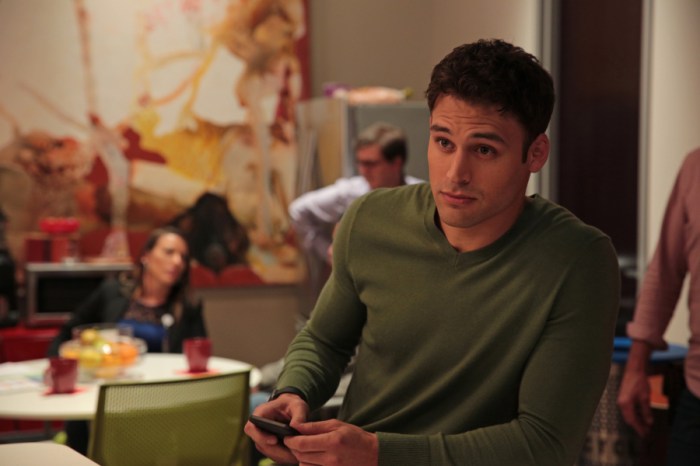 But the really juicy stuff, as always, is what the public isn’t told — like the fact that Sarah and Jake were lovers, or that Oscar might have physically abused his late wife, or that Sarah was in the process of getting a fake passport. The devil, as well as my interest in this show, is in the details.

* For a show that prides itself on exposition (hence the network president introducing himself by saying “As the network president…”), I’m surprised Megan’s former profession — the oldest profession, one might say — was introduced so subtly. Do a lot of former escorts work in television news? And while I’m throwing questions out there, could Megan just be Cecily Strong in a wig? The resemblance is uncanny.

* It’s probably too soon to pick a favorite character, but I’m throwing caution to the wind and declaring my love for Louise (Kate Jennings Grant). I also feel like, in a perfect world, Ryan (Ryan Guzman) would have taken Louise up on her invitation at the hotel. But as she said, there’s always “next time.”

* Bradley (J. August Richards) may be a good lawyer, but he’s not exactly subtle when it comes to secrets. Why would you ever scream “You were in love with his wife!” in the middle of a crowded office?

* That said, as a Drop Dead Diva fan, I might have let out a faint squeal when Kate Levering (aka Kim Kaswell) appeared on screen as Gregorian & Gregorian’s opposing lawyer. (FYI: The two shows share a creator in Josh Berman.)

Now that you’ve suffered through my opinions, let’s hear yours: Grade the premiere below, then drop a comment with your full review. Did Notorious earn a spot on your DVR?