There’ve been a lot of gnarly sights over two seasons of How to Get Away With Murder: A Lady Justice trophy connecting with Sam’s juicy skull. The already mangled corpse of that relentless district attorney (freeeeee) free-fallin’ off a balcony. Wes’ face getting splattered with the contents of his biological father’s noggin.

But Annalise Keating rocking a flannel shirt and gardening gloves in the Season 3 premiere? The horror! In the name of all that is Shondaland, someone please tell me our heroine was surreptitiously tending to a batch of front-yard hemlock, part of her long-range plan to leave her enemies writhing on the ground and gasping their final breaths.

OK, OK, I suppose even Annalise needs the occasional break from guzzling vodka, terrorizing her underlings and making outrageous courtroom pronouncements that would get a lesser attorney dragged off to a cell and charged with contempt.

And let’s not forget, Annalise’s HGTV interlude was merely one of a dozen or so gasp-inducing moments that kicked off a flash-forward murder mystery, a devastating breakup, a possible execution and the introduction of a new character all of America is sure to despise.

Let’s recap ’em all as we break down the action from “We’re Good People Now.” 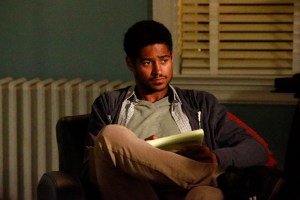 WE KNOW WHAT THEY DID LAST SUMMER | A series of flashbacks (with accompanying present-day scenes) fills us in on how the Keating Five and Annalise recovered (or didn’t) in the wake of the Hapstall murder case/bloodbath/frame job/madness at the end of Season 2. Laurel vacationed in Mexico with her mom — but is intermittently leaving love-hate messages in Frank’s still active voicemail box, despite swearing to Annalise that her MIA beau is dead to her. Michaela needed Annalise’s help to get her out of a driving-while-intoxicated charge — awww, Annalise touchingly offered up her liquor cabinet to her young protege to help her avoid a second strike! — but now Ms. Pratt is showing as much enthusiasm for her law classes as Sarah Palin finding one of those newspaper things outside her hotel door.

Meanwhile, Asher’s still estranged from his mother, penniless and working as an R.A. at the Middleton dorms to pay his tuition. Connor’s scored a promise from Annalise that she’ll never, ever, ever hire Oliver (more on that in a second). And after lying to police about his connection to sniper victim Wallace Mahoney (and screaming out his feelings in the woods with his rescuer Annalise), Wes is keeping an arm’s length from the Keating Five and dating a so-sweet-she-must-be-this-season’s-sociopath gal named Meggie.

BABY(FACE) DADDY | The episode begins shortly after Wallace Mahoney’s death in the Season 2 finale, and after Annalise picks up Wes and brings him to a desserted rest stop — raise your hand if you thought this was the moment they’d finally get it on… no? just me? — she learns it was Frank who brought Wes to New York City to meet his biodad. Annalise is convinced Frank fired the bullet and embroiled Wes in the ugliness so that Annalise wouldn’t be able to involve law enforcement. (Or at least I think that’s her working theory? Her logic felt a tad fuzzy to this recapper.)

Frank, meanwhile, shaves his face, buzzes his hair and manages to look 10 years younger and yet just as hot as he ever was. Bonnie wonders aloud if he’s dead, and then wonders if Annalise might be responsible. “I’m no killer, Bonnie. And God forbid I let Frank turn me into one. Bastard’s just not worth it,” the bosslady sighs. But wait just a second. Annalise has a burner phone in her jewelry box — the “xoxo” from her contact is kinda flirtatious, no? — and it turns out to be a new heavy she’s hired to track down Frank. When he does, he calls Annalise, tells her it’s “do or die” and asks what she wants him to do. As Annalise pauses meaningfully, Frank sneaks up behind the dude and begins to choke him out. And Annalise
Annalise’s new heavy has spotted frank — what do you want me to do? Annalise does what any sane person would do in this situation — flipping her phone shut, tossing it in a drawer and (I’m guessing here) using the Absolut to absolutely erase the memory from her consciousness. 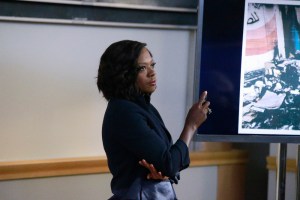 LAW & ORDER: STUDENT CLINIC | Annalise has launched a new and exclusive criminal law legal clinic/class — and naturally, Laurel, Asher, Michaela, Connor and Wes made the cut (much to the very vocal chagrin of a delightfully douchey fellow student known as Mr. Drake). The Keating Five freak out like Kris Jenner during a paparazzi blackout when Annalise pulls down her classroom screen and there’s a picture of her face with the word “KILLER” across the bottom. La Keating remains blasé (“At least they chose a good photo”) even after the same image gets wheatpasted across an outdoor bulletin board. Annalise is not even rattled when Wes (who landed first-chair thanks to his suggested defense) loses in the deportation case of an Iraqi refugee caught with marijuana.

We learn, ultimately, that the criminal law clinic was Annalise’s on-the-fly suggestion after Middleton University’s new president (Lauren Velez, an intriguing mix of threatening and reassuring) announces plans to transition Annalise into a research position, mainly because the five students she’s currently employing at her firm are all ranked in the bottom ten percent of their class. (Not bad considering all the murders they’ve been covering up at night, no?!) For the record, the quintet, ranked highest to lowest, read as follows: Laurel, Michaela, Connor, Wes, Asher. (And yet Connor got accepted at Stanford?!)

LITERALLY, THE WORST BREAKUP SINCE BRANGELINA | So remember how I mentioned Annalise promising Connor she wouldn’t hire Oliver. “We’d ruin him,” she theorizes. Well, fast-forward to Ollie dropping by with a portfolio, a case for hiring him (he could hack into Annalise’s system, no problemo!) and the confession about how he not only deleted Connor’s Stanford acceptance email but rerouted the university’s calls to his boyfriend to keep him put in Philly. “I can be bad, too,” he says, not sounding nearly as femme-fatalish as that might sound on paper. Annalise is convinced, and when she breaks the news to Connor, she spills the beans about Connor’s dark activities. He’s pragmatic about it when he gets back home to Oliver. “I was putting my feelings before yours — and I’m sorry for that,” he says. But Oliver isn’t accepting the forgiveness — insisting Connor ought to be angry, claiming he doesn’t know himself anymore and then announcing he wants to go through his self-discovery alone. Connor looks utterly baffled, so Ollie makes it clear — he wants to break up. I’ve shipped this couple pretty hard — though not as hard as Connor and the ill-fated copy-room dude with the watery eyes — but Oliver’s rationale is, well, borderline infuriating. I’m not ready to play Taylor Swift’s “We Are Never, Ever Getting Back Together” on repeat loop, but Oliver, you’re on notice, buddy. (Is it too early to start trending a Connor-Asher hashtag on Twitter? #CasherHTGAWM?)

WHO DIES? | The episode ends with a flash-forward: Annalise arriving home at night to find a crowd of onlookers, a body being wheeled into an ambulance, and her house/office engulfed in flames. It’s one of the more ominous sequences in the show’s history — the use of Son Lux’s “We Are the Ones” definitely enhances the anxiety of the situation — and when Annalise peeks under the sheet, her hysterical, horrified reaction tells us the victim is someone in her inner circle. Whether the identity of the victim, the circumstances of his/her death, or the identity of the killer turns out to be Season 3’s big overarching mystery remains to be seen. But like Nate’s even-more-ripped abdominal muscles, it’s a rock-solid start to HTGAWM‘s next chapter.

What did you think of How to Get Away With Murder’s Season 3 premiere? Grade it in our poll below, then sound off in the comments!