Ch-ch-ch-changes — that was the theme of Thursday’s Chicago Med Season 2 premiere, which featured new job titles, bosses or paramours for many of the docs.

Let’s review who got it on, who got scolded and who got a fresh start:

CONNOR | He gets off on the wrong foot with his new supervisor Dr. Latham, who bluntly asks Connor if he killed Dr. Downey. It gets worse: Dr. Latham reveals that the young doc wasn’t his first choice for the fellowship. Then it gets really bad. When Connor questions his boss during surgery, Dr. Latham yells at him in the middle of the operating room as the rest of the staff stares in shock. Despite that outburst, Dr. Latham plainly says, “I’m not upset.” Connor looks understandably confused. Methinks Dr. Charles might be the key to figuring out what’s going on with Dr. Latham.

WILL | Attending physicians have to provide their own malpractice insurance, which is going to cost Will a pretty penny after last season’s lawsuit. His new title also comes with another problem: med student Jeff Clarke, who’s a little too eager to jump into action. The attending is forced to berate the newbie for not following the rules. “It’s for his own good. I know what happens when you don’t follow protocol. It’s not personal,” Will insists to Maggie. Suuuure.

NATALIE | One of the nurses calls Natalie an ice princess – hmmm, I never got that impression from the character last season – which prompts her to ask Jeff if she comes across as rigid. Cue reminiscing and laughing about their crazy past as Will looks on. You know what’s not rigid or ice princess-y? The way Natalie happily accepts Jeff’s invitation to come back to his place for a nightcap. You can tell she’s surprised by just how much she wants it. 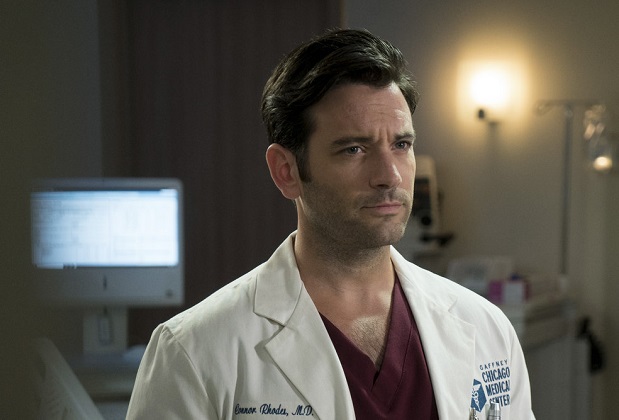 ETHAN | It’s only his first day as chief resident, but Ethan already has ideas about improving flow in the emergency department. Maggie just nods at the doc, before whispering to Goodwin, “I hate killing their dreams.” Needless to say, his brilliant idea falls apart before the day is even over.

SARAH | Dr. Charles approaches Sarah at her new barista gig about a psych residency, but she’s hesitant to accept the position. After a trial run with Dr. Charles, Sarah realizes that by combining her clinical knowledge with psychology, she can really help people. Unrelated: She’s still going strong with the pathologist boyfriend.

APRIL | The nurse’s TB is latent, but she’s keeping Tate and his son at arm’s length. “I just don’t feel clean,” she tells Will. After a patient’s case hits close to home, April finally agrees to have dinner with her beau.

GOODWIN | With her hubby officially gone, Goodwin cleans out his desk in an attempt to move on.

Med fans, what did you think of the season opener? Grade it via the poll below, then hit the comments to back up your pick!