Having recently explored Camelot and no less than Hell, the heroes of ABC’s Once Upon a Time will spend Season 6 “back home” in Storybrooke — where they just got some uninvited (and perhaps restless) guests.

With the season premiere arriving Sunday at 8/7c, TVLine spoke with series creators Adam Horowitz and Eddy Kitsis about telling Aladdin’s and other “untold “stories, Emma the Savior’s discovery, the Evil Queen’s “delicious” attack plan and so much more. (Yes, excerpts of the following have previously appeared on TVLine.)

TVLINE | First off, what is the theme for Season 6?
EDDY KITSIS | I think that this year, the theme is really about the duality of ourselves.
ADAM HOROWITZ | What we really want to explore is who we are, and what are the conflicting things within ourselves that make us who we are. With the Evil Queen being split, it’s taken to a literal level, as we see the two halves of Regina go at each other. But with each and every one of our characters, we want to have that theme hit in a way where we say, “OK, who are these people? What are the conflicting parts of themselves?” And that goes to one of the cores of the show, which is good and evil and “happy endings” aren’t what they seem in these fairy tales. All of our villains have good in them. And all of our heroes have villainous tendencies in them. We wanted do in a season where we’re back in Storybrooke and take that as an opportunity to dig into each one of our characters and explore what makes them tick. Can you correct these mistakes inside of you, or are they a part of you? Can you really take evil out of you? Or is it more complicated than that?

TVLINE | For your purposes, what is an Untold Story?
KITSIS | It is a story that has yet to play out. You’re going to see that a lot of people went to the Land of Untold Stories because they wanted to literally push “pause,” like they were watching their own life in TiVo. And whereas when the Dark Curse paused you, you had no choice, these are people who chose it for different reasons — out of fear, out of not wanting to face something. We want to explore the idea of: Does the story continue on, or does it have that ending point?
HOROWITZ | In Season 1, much of it was about these stories we knew that ended in a certain way, and what happened after. This is a slight tweak on that idea, which is: What happens to some of these stories if they don’t quite finish the way we thought they did, and were suspended midstream? What would make characters want to suspend their stories? 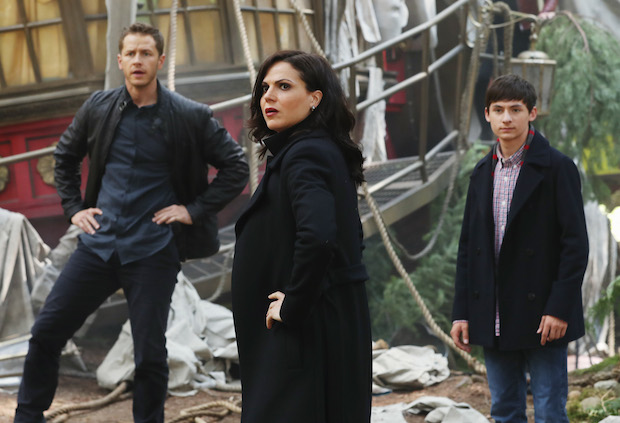 And what would happen once they restarted? What you will see is that as their paused stories begin again, that has implications for them and for our Storybrooke characters.

TVLINE | Why is lording over Storybrooke so important to Mr. Hyde (played by Smallville‘s Sam Witwer)?
KITSIS | It is the place where he can have his story play out. When we get into his backstory, you’ll realize that some people may be in the Land of Untold Stories in a way where they’re “trapped.” So, similar to the way Hook wanted to get to the Land Without Magic, so he could kill Gold, you’ll realize Hyde wants to get to Storybrooke so that his story can play out.

TVLINE | Do the heroes view them as interlopers? Is this an immigration issue?
KITSIS | [Laughs] What you will be seeing is our heroes wanting to help. We see Emma really back in the position where she’s a Savior trying to help people find their happiness. Last year, we got into the Dark One mythology, and this year you’re going to see the Savior mythology — as we saw at Comic-Con [in the first teaser], she wasn’t the first one. Aladdin (Deniz Akdeniz) is one, as well. It’s really Emma and the Yellow Bug riding around Storybrooke helping people, which is what we wanted to come back to this year.

TVLINE | Is Emma a bit disenfranchised by this “other Savior” reveal, or does she find it interesting?
HOROWITZ | Her reaction runs the gamut of a few things, some of which we don’t want to spoil. But there are positives and negatives with learning that she wasn’t the only one, and she’ll have to deal with both.

TVLINE | Where are we entering the Aladdin story, in the scheme of what we already know about it?
HOROWITZ | It’s a tricky question to answer. Given the nature of our show with flashbacks and different timelines, we may be entering it at multiple points. Where we see [the story at] in the premiere episode is a very different point from where we enter it later in the season.

TVLINE | How might Regina assist Emma on her latest Savior mission?
KITSIS | In Season 1, we had Emma trying to help the citizens of the town find happiness while fighting the Evil Queen. Now she’s got Regina on her side to help her.

TVLINE | Is it safe 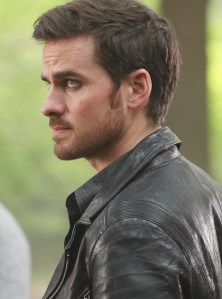 to say that Emma and Hook’s relationship may go untested for a bit, after the trip to Hell and all?
KITSIS | We are definitely going to be moving their relationship forward, but no relationship is a fairy tale. So if people are expecting no drama, we hope that they will enjoy what we are showing. But they’re going to be working together as a unit.
HOROWITZ | We pick up pretty directly from where we left them at the end of last season, where for the first time Emma was professing her love without the duress of a life-or-death situation. Of course, life-or-death situations come pretty quickly on our show, so that will change, but I think that was an important step for her and it is something the two of them will deal with and explore further. Does that mean there won’t be challenges? No, there are plenty of challenges ahead, as with every relationship. But they have made a certain amount of progress since last season.

TVLINE | Is the purely Evil Queen’s plan going to be subtle, will it be stealthy?
KITSIS | It’s going to be delicious. She is going to attack them with style and with grace you would expect from the Evil Queen.

TVLINE | Was Regina’s magic weakened at all, by splitting off her evil half?
HOROWITZ | The question of what this split has done to her magic is addressed very quickly. She’s dealing with many different ramifications to the split, and what it does to her magic is one of them. 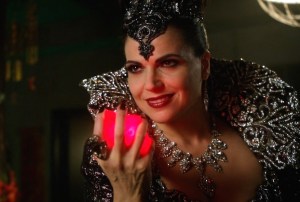 TVLINE | Something about a long-believed truth being called into question?
HOROWITZ | Yes, in the first couple of episodes that happens.
KITSIS | This is an Evil Queen who has all of Regina’s memories, and now that she has been unleashed, she’s got a whole new set of plans to destroy their lives.

TVLINE | To be clear, 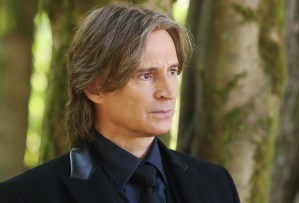 Rumple’s challenge is to break Belle’s sleeping spell, not to get her out of Pandora’s Box.
HOROWITZ | Yes. Getting her out of the box isn’t the issue, because he put her in the box. It’s the sleeping spell she’s under. That is his focus in the premiere.

TVLINE | You’re introducing Morpheus in that storyline. Does he have some sort of skin in the game, whether Rumple rescues Belle or not?
KITSIS | He sure does, but you will have to see the premiere to understand what that is. I would say, though, that he is highly motivated and emotionally involved.

TVLINE | Will Robert Carlyle’s off-season haircut be explained?
HOROWITZ | Absolutely And the answer isn’t that he went to do Trainspotting 2.

TVLINE | “Rumbelle” fans want to know if they will see any warm, fuzzy parents-to-be moments.
KITSIS | We’re always rooting for them to get them, but we’ll just have wait and see what happens. But I could tell you the ride there is pretty bumpy.
HOROWITZ | They certainly do spend some time, though, reminiscing, and discussing what it’s going to mean when their child is born.

TVLINE | What will Zelena be up to? At Comic-Con, Rebecca Mader teased some sort of “falling out” between the sisters.
KITSIS | Well, she feels torn between two sisters. She’s always wanted one, but…
HOROWITZ | Now she’s got two!

TVLINE | All told, would you say you’re almost doing a Case of the Week format, with the Untold Stories characters?
KITSIS | We did want to go back to the Season 1 modality of “heroes helping someone with a problem,” so there will be larger arcs with each character, but they’re going to be character arcs. And we’re going to have kind of a mix between the mythological, serialized episodes and ones that are kind of like Season 1 with Cinderella, where there was a beginning, middle and end to it.
HOROWITZ | And when we do that sort of Case of the Week story, it’s always thru the prism of our main characters. When we met Cinderella, it was really about Emma and how she came to be the person she is. It’s about finding these reflections on our main characters. Sometimes it’s a case where there’s a connection between them, like in the upcoming Hook/Nemo story, and sometimes there are stories where it’s more of a character reflection thing between one of our main characters and one of these other characters. But the goal is to have fun with these stories and at the same time dig a little deeper into our heroes.