To put a perverse twist on a Hakeem Lyon jam, a series-regular character went “drop-drop, drop-droppity-drop” — with fatal consequences — in Empire‘s Season 3 premiere.

That either Anika Calhoun or Rhonda Lyon — last seen in the Season 2 finale brawling at the edge of a high-rise balcony — plummeted into the open arms of the Grim Reaper seemed an inevitability. But according to showrunner Ilene Chaiken, she and series creators Lee Daniels and Danny Strong didn’t decide who was damned until well after that fight sequence was shot.

Before we dive into the hows and whys of — spoiler alert, obvs — Rhonda’s smashing exit, a recap of the action from the Season 3 premiere, “Light in Darkness.”

WHITE CHICK, DOWN! | As the hour opens, Rhonda plummets from the roof of Lucious and Anika’s impromptu wedding hall onto a parked car. The look on her face says it all: She dead. As Andre anrgily confronts Anika up on the roof for killing his wife, his father’s new bride (¡who happens to be carrying his brother’s child!) ups the drama with a perfectly timed breaking of her water. (It’s the cirrrrrcle of life… and death!)

THERE’S GOT TO BE A MOURNING AFTER… RIGHT? | Aside from Andre’s declaration that he and God are officially done, nobody’s exactly reaching for an extra Kleenex in the wake of Rhonda’s demise. In fact, Lucious slips into the delivery room in faux support of Anika and whispers threats and strategies into her ear. “Speaking of push, you see those cops out there,” he grins, in a moment that would fit comfortably next to “putting young Jamal in a trash can” on his Top 10 Nastiest Moments. Lucious concocts a story that Rhonda tried to jump and take Anika with her — and he expects his new bride to sell it like Mirage a Trois made us all crave mimosas for a hot minute back in Season 2.

I almost expect another murder to happen when the doc’s all, “Congrats, it’s a girl!” and Lucious (who’d been told by Anika that she was carrying a male heir) screws up his face up in a misogynistic scowl that is the opposite of #ImWithHer. Perhaps it’s just a homicide delayed, though, since Anika (having to look like a real spouse to avoid testifying against Lucious) is forced to move into the Lyon patriarch’s mansion, where his knife-wiedling mother is hissing, “I know you’re trying to poison me.” I know one grandma who just got crossed off Boo-Boo Kitty’s “potential babysitters” list. 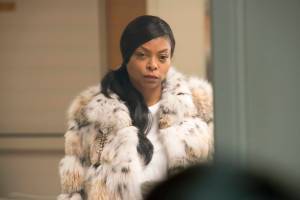 GUESS WHO’S COMING TO (DISRUPT) DINNER? | Lucious’ law-enforcing, vengeance-seeking half brother Tariq accepts a dinner invite from Papa Lyon, and uses the opportunity to rattle the cages of every member of the family. Fake-ass Lena Horne locks lips with Lucious — the better to stop Tariq from accepting her hubby’s invite to examine their bedsheets — while Tariq crassly wonders why Cookie is willing to “play second fiddle to this mulato bitch.” Our Lady of Legendary Wednesday Night Quips declines to serve up verbal bitchery for the interloper, though, instead asking if he’d like a to-go bag and directing him to the exit. Make no mistake, though: Cookie may be putting on a united front, but her feelings toward her ex are about as warm as Elizabeth Warren and that wretched Wells-Fargo CEO. She ends the hour telling him “After tonight, I think I’m done, Lucious” and asking for a wall in which she handles Empire’s music, he handles Empire’s business and they stay out of each other’s business. And he agrees to the terms of the deal — to prove he loves her.

IT AIN’T OVER ‘TIL THE WHITE LADY SEETHES | Talk about me burying the lede! Rhonda returns at the end of the hour — in Andre’s imagination — and she is in full Machiavellian, “tell me about how you took Deputy Mayor Alvarez in the bathroom” mode. As Andre weeps that his inaction ruined everything, Rhonda whispers, “Andre did mess up — but you should’ve thought about that before you let that bitch murder me.” And then she reminds Andre that without her, he doesn’t know how to manage his meds, his father, his existence. “Without me, you’re just some Philly thug with mental problems.” Damn! Death has made Rhonda cold in more ways than one! Here’s where I hallucinate Tim Gunn on my living room couch asking, “What about Andre? Who’s looking out for Andre?!“ 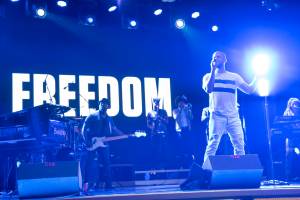 IN OTHER NEWS | Lucious’ latest scheme involves dressing like a Great Gatsby character, playing poker with hip-hop power players and trying to buy the catalog of a rival rap legend for his new streaming service. Jilted groom Hakeem shows up at Tiana’s and while her mouth says “pull up your pants, fool,” her eyes look misguidedly wistful about the visit. Shyne is back, and no longer playing the drunken jester: He crashes Hakeem’s recording session, violently assault’s Hakeem’s producer, and (improbably) winds up (with his own protege Nessa) laying down tracks for the youngest Lyon son later in the week. (Their resultant jam, “Bossed Up,” is pretty hot, though.) Jamal, still recovering from being shot by Freda, is becoming reliant on painkillers — but they can’t prevent a bout of PTSD during a huge Empire event where he flees the stage at the start of his “Need Freedom”/”Free Freda” political anthem. No worries, Nessa grabs the mic and slays — all day — like she’s heeding Beyoncé’s call to get in formation. Oh, and Tariq’s got a hidden camera in a teddy bear in Bella’s nursery!

Now, let’s get to our Q&A with Ilene Chaiken to break down the premiere’s pivotal moments. 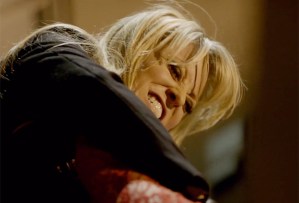 TVLINE | Why did Rhonda have to die? And did you know she was going to be on the losing end of that brawl with Anika when you wrote the Season 2 finale?
When we wrote the Season 2 finale, we did not know who was going over the balcony. We love both of those characters and both of those actresses — and we didn’t want to lose either one of them. It was an incredibly difficult situation that we wrote ourselves into. After we shot the scene, I said, “You realize what this means? One of these women is not coming back.” And my two dear colleagues [creators Lee Daniels and Danny Strong] went, “No, no, they have to come back! We love them!” And I said, “Well, it’s not too late. We could change our minds and not use the scene.” And they were like, “No, we love the scene. We love the scene.”

So, while we were all devastated by this scenario, we live in a world where if someone gets thrown off of a balcony 50 stories up, that person dies. [Laughs] We had to honor that, and we had to make our choice. We didn’t make that choice based on anything in the real world, nothing along the lines of, “I like this person better.” But in that moment, when you look at Andre’s face, it felt like [Rhonda] was the one who fell. And while we had every intention of having both of those characters in our stories for years to come, we had to think about how we’d set up the Anika story for Season 3. What is the point of having Anika marry Lucious in that twisted scene at the end of our finale if we’re not going to go forward and tell that story? Ultimately, that tipped the decision.

TVLINE | Since last May’s finale, I’ve seen some back and forth in the TVLine comments section pointing out that the death of Rhonda would mean killing off the only white series-regular character in your ensemble — not that we don’t see the sole black character get killed all the time on any number of network TV shows. I also saw a recent reader remark that it would be especially cruel to kill Rhonda considering she’d already been pushed down a flight of stairs, lost her baby, and didn’t have anyone believe her when she realized Anika had assaulted her. How would you address those types of complaints?
I would say that death doesn’t take any of those factors into consideration. Death makes her own decisions. She doesn’t reason these things out the way we do. And in real life, fairness is not the deciding factor in these random events. Someone to whom all those terrible things happened is certainly not less likely to meet with a grisly end, is she?

TVLINE | You did manage to bring Rhonda back at the end of the hour — via Andre’s hallucination. Did that scene spring from your desire to not say goodbye quite yet to a cast member who’s been with you since Day One?
Yes, it was a way to keep Rhonda and Kaitlin Doubleday on the show. We adore her and her presence in the show. But we wouldn’t have done anything that didn’t seem right or interesting or true to character. Because of Andre’s mental issues — and because we’ve spent a lot of time inside his head, and in his psychological-emotional inner life – it felt like a real opportunity to reflect his process of grieving, coping and coming apart.

TVLINE | Will we see more “Rhonda” in upcoming episodes?
We might very well. I don’t want to answer any further than that.

TVLINE | I have to say I loved Anika’s delivery scene — with Lucious whispering into her ear about “pushing.” Which raises the question: How does Anika fit in the Lyon family going forward? That whole scenario is pretty messed up.
Isn’t that the beauty of it? Anika is in a predicament. They all are — but Anika is, in particular. The Lyons have accepted to some extent that she’s still in the mix, but they haven’t embraced her warmly. And now she’s living under the same roof with Lucious and Leah — and crossing paths with Cookie and Andre — and it’s going to be uncomfortable to say the least. Certainly, there will be ramifications to all of it. Suffice to say, that story is not yet resolved. 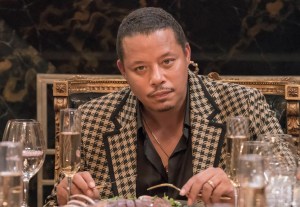 TVLINE | Is Lucious possibly more sinister than ever?
There will always be dark corners that we haven’t yet turned with Lucious Lyon. And I said this to you after last spring’s finale, the theme of Season 3 of Empire is dark versus light, the battle for the soul of the Lyon family and the empire. And Lucious, not too surprisingly, represents the pull to the dark side.

TVLINE | We saw Lucious taunt Jamal during a PTSD flareup, express anger over Andre not returning to work right after Rhonda’s death, and antogonizing Hakeem about taking his place as Bella’s father. Did you feel like it was necessary to go there to justify Cookie’s decision to truly break from him romantically?
In truth, we didn’t write him to behave that way in order to give Cookie that motivation, but it plays into it. It’s who Lucious is and it’s what Cookie is coming to see. But at the same time, Lucious will always show two sides. He has a remarkable ability to be vile and loving — both at once. And in this episode, you see Cookie trying to really separate from him, and we give her lots of reasonz to do so. But going forward, you’ll see more of the old tenderness between them, too, because Lucious can bring it. He’s not going to make it easy.

TVLINE | The other last-minute surprise was the “Teddy-cam” in Baby Bella’s nursery — one that Tariq is watching intently.
You’ve got the nanny cam that allows Lucious to watch the nursey through his internal surveillance system, but that bear is there unbeknownst to Lucious, Anika or anyone else. It will definitely have a consequence.

What did you think of the Empire Season 3 premiere? Were you shocked that Rhonda died? Was it the right move to kill her off? Grade the hour in our poll, then sound off in the comments!