In the wake of calamity, “Designated Survivor” Tom Kirkman got sworn in as the unlikely President of the United States this Wednesday night. Does ABC’s new D.C.-set drama get your vote?

Dez (as I am choosing to call it around the office) stars 24 alum Kiefer Sutherland as the aforementioned Secretary of Housing and Urban Development, who was on the verge of being demoted to the Chairman of the International House of Pancakes (or the like) when the President and his entire Cabinet are killed in a bombing of the Capitol.

Kirkman learns of his 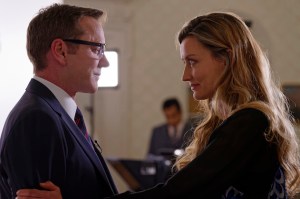 incredible ascension while being whisked from the place he was quietly watching the State of the Union to the White House, where he meets with the Joint Chiefs of Staff to get the 411 on the attack — which, right now, is zero. Kirkman suffers expected jitters, as witnessed by speechwriter Seth Wright (House‘s Kal Penn), who unwittingly speaks for the many in expressing massive doubts about the new POTUS. Still, Kirkman is all they’ve got for right now, so he’ll do the best he can do. Kirkman has a wife, Alex (Californication‘s Natascha McElhone), who is an attorney; a son, Leo (Tanner Buchanan), who after going missing is eventually tracked down at a dance club, where he was peddling drugs, by Secret Service agent Mike Ritter (The Last Ship‘s LaMonica Garrett); and an adorable moppet of a daughter, named Penny (McKenna Grace). 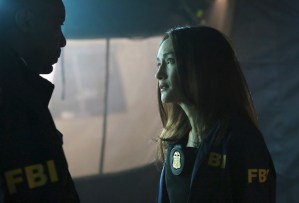 the bombing site, we meet FBI analyst Hannah Wells (Nikita‘s Maggie Q) and the investigation’s lead agent, Jason Atwood (Malik Yoba). (Thank your lucky stars the revised pilot scrapped Hannah’s comically bad blind date.) There’s little for the FBI to go on at first, until the search team uncovers a “dud” bomb that failed to detonate. Maybe its mechanics/materials will offer a clue? Hannah meanwhile cannot help but notice that there has been no chatter, no bragging or chest-puffing, on the dark web, where terrorists are typically happy to lay claim to an attack. That, to her, suggests that whomever was behind the Capitol bombing is not done.

Ultimately, Kirkman is informed by JCS Deputy Chairman Cochrane that Iranian destroyers appear to be moving to cut off the channel through which a bulk of the world’s oil supply travels. Kirkman allows Cochrane to get some jets in the air, but before declaring war he takes a meeting with the ambassador to Iran. Borrowing a suit from a staffer, the President assures the ambassador that he is “as straight a shooter as you will find in D.C.,” so he means it when he says that unless Iran pulls back its destroyers, the morning headlines won’t be about the United States‘ Capitol being destroyed. The ambassador, having claimed no awareness of his country’s military aggression, agrees to make sure the destroyers are docked within three hours.

His first eighth of a day or so on the job done, Kirkman then sits himself down before the television cameras and doffs his horn-rimmed glasses, bracing to addresses the nation for the first time as POTUS, to be the “Presidential voice” they need to hear during this horrible time.

What did you think of Dez? And just for fun, I’ve embedded below the poll The West Wing‘s “designated survivor” scene: