As if to prove to Shelby that she couldn’t run away from her problems, American Horror Story: Roanoke barely let her pull out of the driveway of her haunted house in the Season 6 premiere before it had her, quite literally, bump into old-timey pedestrian Kathy Bates and follow her into what appeared to be a mash-up of The Blair Witch Project and Salem. How would Mrs. Miller get on with — or, rather, get free of — the pitchforks-and-torches crowd in the second episode? Read on and find out…

FIGHT OR FLIGHT | As “Chapter 2” began, Shelby bore witness to Bates’ as-yet-unnamed character affixing a pig’s head to the noggin of an unfortunate soul, crying “Let him be purified!” and… well, basically cooking bacon. Upon being spotted by the madwoman, Mrs. Miller did what any sensible person who didn’t want to be added to the menu of a pig roast would and ran like hell… straight into the road, where Lee found her and took her to the hospital. By the time Matt got to his wife the following day, she had decided that it had been the locals trying to scare them off. But since they had sunk all their money into the house, she wasn’t going to let that happen. “If it was a fight they wanted,” she said, “it was a fight they were gonna get.”

BRING YOUR DAUGHTER TO HELL DAY | Though Lee was reluctant to bring her daughter Flora to the house, given everything that was going on, she was also eager to reconnect with her. But no sooner had the little girl been dropped off by dad Mason than she was doing spooky things like talking to Priscilla, an “imaginary” friend who promised to make a bonnet to help make all the blood stop. (Who, at that point, wouldn’t send the kid back to the safety of their ex?) Next thing we knew, a window was broken and a bonnet thrown through it. (Who, at that point, wouldn’t send the kid back to her dad?!?) That night, Shelby and Matt heard noises, and she went outside to investigate rather than stay inside and cower. “I wanted them to know,” she explained, “that we wouldn’t be bullied.”

PLEASANT SCREAMS | In the woods, Shelby discovered a pig being badly overcooked. “This was beyond having a cross burned on your lawn,” Matt understated. After the police promised to check out the Polk family and give the Millers protection, Matt got up in the night to answer the phone (its cord cut), only to have the voice on the line (Shelby’s?) say they were hurting her. Then, the two batty nurses appeared before him and shot elderly patient Margaret in the head. “I had to be dreaming,” Matt said. If only! But when he called in the cop on duty outside, all they found was… nothing. The next day, Mason arrived to take Flora home, and he and Lee discovered their daughter offering Priscilla her favorite doll in exchange for not killing them all — and saving her for last! 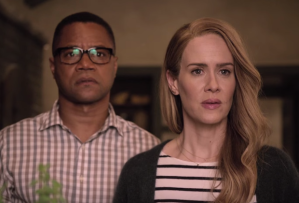 ASSISTED DYING | Livid, Mason didn’t just take Flora home, he dragged her home, sending Lee tumbling off the wagon. Drunk as she was, though, she hadn’t stuck half a dozen knives in the ceiling. Shortly thereafter, the Millers spotted a woman in their yard, and while they were investigating, the nurses and Piggy Man scared the tipsy straight out of Lee. The Millers’ search of a cellar in the yard yielded another tape starring Dr. Elias Cunningham (Denis O’Hare), an author who’d come to the house to write a true-crime novel about the nurses — Bridget and Miranda — siblings prone to killing assisted-living patients whose first initials spelled “murder.” (Well, “murde-” — they never quite finished.) Off that revelation, Matt found “murde-” painted in blood behind their wallpaper. So what stopped the sibs? Something even more evil than them in the house, Elias suggested before going back in himself. At the climax of the tape, Matt discovered a meat cleaver — dripping blood — in a door.

OUT ON A LIMB | Freaked, the Millers demanded that the bank take back the house. You can well imagine how that went. “I didn’t think it could get any worse,” said Matt. “Then it did.” Lee had committed a felony by making off with Flora and bringing her back to the house. Matt pointed out that hello, this was bad, potentially amber-alert bad. Luckily, Shelby talked Mason out of involving the cops. Unluckily, before he could pick Flora up, she was lured outside, where she vanished in the woods — except for her sweater, which her mom spotted about a mile up a tree!

So, what did you think of “Chapter 2”? Did you pick Special Guest Star Lady Gaga out of the crowd? Hit the comments!