New Girl kicked off its sixth season Tuesday night, and one thing quickly became clear: As much as Schmidt, Nick and the rest of the loftmates would like us to think they’ve matured, the truth is they’re still just as hapless as the day we met them.

When last we saw Ms. Day, she had begun to come to terms with the lingering feelings she had for Nick — that is, until she encouraged him to fly to New Orleans with on-again girlfriend Reagan, who would be stationed in Louisiana for three months of pharmaceutical sales. 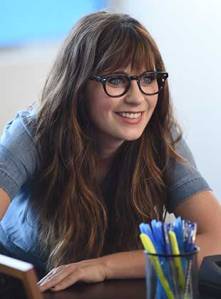 We discover early on that not much has changed with Jess. While Nick has been away from the loft, she’s taken up all sorts of hobbies to distract herself from his absence — learning Portuguese, joining a gym, crafting wooden table legs, all the usual pastimes. But try as Jess might to convince herself she’s OK with Nick’s new relationship, his early return from New Orleans completely throws her off, and she finds she can barely string together a coherent sentence in his presence. (Naturally, she spends most of the episode trying to avoid Nick, which predictably goes super well.)

Once the rest of the loft is looped in about Jess’ unresolved feelings for her ex — “We all need… to meet new people,” Schmidt correctly observes — she reluctantly attempts to tell Nick what’s on her mind. But when she heads into his bedroom to break the deeply awkward news that she still likes him, Nick has a bombshell of his own to drop: He finished his first book while in New Orleans, and as a thank-you for encouraging him to take the trip in the first place, he dedicated it to Jess. (Well, and the Chicago Cubs, because priorities.)

With that sentimental moment hanging between them, Jess opts not to tell Nick about her feelings for him just yet. Settle in, ‘shippers. It’s going to be a long season.

* Cece and Schmidt, desperate to move out of the loft and start their lives as newlyweds, manage to find a house that won’t completely drain their bank accounts. After firing Leslie, their stunningly unintelligent realtor (and the sister of Winston’s girlfriend, Aly), Cece and Schmidt take a tour of their dream home — but in order to afford it, they’d have to put Schmidt and Nick’s bar up as collateral.

Not willing to take the financial risk, Cece and Schmidt instead settle for a cheap fixer-upper – where you at, HGTV’s Chip and Joanna Gaines? — and party it up in their new home with friends, champagne and a little celebratory demolition.

* As for Winston and Aly? Despite the fact that Aly is in Virginia for FBI training, and Winston was forced to spend the summer with her not-so-bright sister, they’re going stronger than ever — even from a distance. “We have to tell each other everything, OK?” Aly urges Winston during a Skype session, which prompts Winston to confess, “I don’t know what ‘panache’ means.” Ah, young love. So thrilling. So passionate.

OK, your turn. What did you think of New Girl‘s Season 6 debut? Grade the episode in our poll below, then hit the comments to back up your choice!