If NCIS had spent any sizable chunk of its Season 14 premiere lamenting the departure of longtime team member Tony DiNozzo, that would have been a dreary affair. Instead, the series smartly focused on his irreplaceable nature, literally, by picking up months later with Gibbs dismissing the eighth probie sent his way to fill the vacancy.

By coming at “the elephant in the room” from a different, bigger-picture angle, it lent that much more weight to the moment that eventually did arrive, where McGee, with a nudge from Bishop, acknowledged that his trouble settling in at Tony’s old desk has little to do with the computer monitors’ “bizarro” orientation, but because he is filling his friend’s shoes, as the new Senior Field Agent. 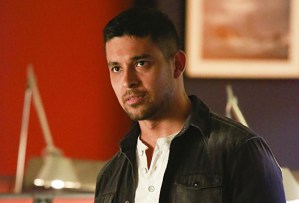 kicked off in slightly unusual form, with a protracted cold open that featured no familiar faces. Instead, we saw long-undercover Special Agent Nick Torres (new series regular Wilmer Valderrama) wooing his lady down in Buenos Aires, when it becomes clear that his cover has been blown, an unfortunate fact that he silences with a quick blade to his accuser’s belly. Prior to offing his adversary, Nick had been warned that his betrayal would cost his sister her life — and indeed, he arrives in the States too late to save her from a (near-)fatal car bombing.

Meanwhile, Gibbs was confronted in person by Special Agent Alex Quinn (new series regular Jennifer Esposito), the FLETC instructor who cannot fathom why “the Goldilocks of NCIS” keeps rejecting the probies she sends his way. Gibbs invites Quinn to shadow his team for a bit, to see what exactly it is he likes/needs in an agent.

Along the way, Quinn has some fun with Bishop (pretending not to remember her tightly wound former student) and plays some poker with Fornell (who has been convalescing at Gibbs’ place, specifically within the cozy clutches of his “microfiber cloud” while consuming copious amounts of cereal).

Elsewhere during the premiere, we learn that Bishop spent her summer in Scotland, where she hooked up with (but didnt hook up with, Tim!) MI-6 officer Clayton Reeves, while Ducky has begun chronicling his life’s work (which got me thinking: prequel spinoff?). Oh, and in the course of working the case, McGee is about to get a “very interesting” update on Mac and Harm from JAG‘s Captain Bud J. Roberts Jr. (played by Patrick Labyorteaux), before they are interrupted. Argh!

In the end, after putting behind bars his girlfriend’s mercenary-recruiting father, Torres is offered an NCIS badge, though he has reservations about being able to be a part of a “team” after eight years undercover. McGee and Bishop, though, says he wont find out unless he gives it a try. Quinn meanwhile commends Gibbs on his “secret” plan to deftly recruit Torres — that it’s not about “finding the agent the team needs, but the agent who needs the team.” But, a-ha, Gibbs says he came away from the experience with two new hires — if Quinn herself is interested.