Marvel’s Agents of S.H.I.E.L.D. opened Season 4 with the introduction of a well-publicized new threat — the hot-headed, vengeance-seeking Ghost Rider — but closed its premiere with a second, equally ominous twist.

Picking up six weeks after the May finale’s six-month time jump, Daisy — working solo and known to the public as Quake — is tracking a white supremacist group when she witnesses them being methodically killed by a mysterious figure driving a ’69 Dodge Charger that becomes engulfed in demonic flame. One surviving supremacist is taken into police custody, while the other is captured by the car’s driver — Ghost Rider.

Meanwhile at S.H.I.E.L.D. — which is now fully staffed but operating independently from the government — Coulson and Mack have been trying to intercept Daisy and bring her back into the fold, May is training her own strike team and a promoted Simmons (now the “S.A.D.I.S.T.”) reports directly to the unseen, unnamed new Director. When May shares intel that Daisy has been spotted in Los Angeles, Coulson and Mack — though pulled off the case — set out to find her, but not before Mack has a rather (ahem) warm reunion with Yo-Yo. 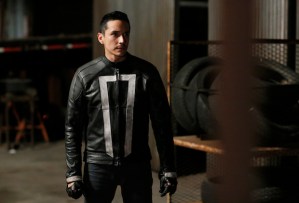 ends up killing his uncooperative prisoner, Daisy visits the other supremacist, who had been hospitalized. He, though, seems to know what he was up against and falls dead, after claiming that if the Ghost Rider even wounds you your soul is doomed. Later, we learn that Yo-Yo is meeting covertly providing Daisy with bone-healing meds as well as S.H.I.E.L.D. intel that has helped her stay a step ahead of Coulson and Mack.

Back at the base, when Simmons confronts her about tipping off Coulson, May gives attitude about working so closely with the new Director. Simmons insists she doesn’t like the Director (or his “color-coded” security protocols) either, but is using his trust to keep control of situations and protect her friends. That said, to give the appearance of disciplinary measures, she dispatches May and her strike team to stop Coulson and Mack.

With Simmons (now his full-on sweetheart) busy with her new gig, Fitz hangs with Dr. Radcliffe and discovers the scientist’s very secret — and unauthorized — new project: an ultra-lifelike artificial intelligence in the form of a beautiful female, named Aida. Radcliffe is convinced he’s almost perfected a useful AI for S.H.I.E.L.D.’s use that will not harm humans, dubbed the “Life Model Decoy.” Fitz at first insists that Radcliffe reveal his work to Simmons, but when it becomes evident that Aida — though conceived as a live-saving decoy (or “shield”) — could be turned into a dangerous weapon, they agree to keep mum until the tech is perfected.

Seeking out Ghost Rider, Daisy is led to an auto yard where she meets Robbie Reyes, who is eventually revealed to be the flaming-skulled avenger (with a lowercase “A”). An intense fight ensues between the two, to the point that Daisy eventually invites Ghost Rider to go ahead and kill her, feeling guilty as she does about all the pain she has caused. But Ghost Rider refuses to kill her, leaving the scene instead. Later, Daisy secretly looks on as Robbie Reyes picks up his younger brother, who is paralyzed and uses a wheelchair.

Meanwhile, May’s team intercepts Coulson and Mack just as they’re monitoring from afar the strange exchange of an exotic box, inside of which is the power to bring enhanced people “to their knees.” When the box is opened, some sort of ghostly spirit (a woman?) wafts out, giving some of the thugs a withered, spectral look. The S.H.I.E.L.D. agents wind up recovering the box, but in the episode’s final scene, May is talking to Coulson about the mission when suddenly she sees his face briefly take on the withered spectral aspect that afflicted the thugs earlier, before returning to normal. Is something wrong with May, or is something wrong with Coulson….?