Almost a year to the day that her run as Graceland‘s Charlie came to an end, Vanessa Ferlito will again wield a G-man’s badge, having joined the cast of CBS’ NCIS: New Orleans as FBI Special Agent Tammy Gregorio.

Because as if Pride and his team don’t have enough to deal with in the Season 3 premiere (airing Tuesday, now at 10/9c), chasing as they are a sniper who targets crowded events, they will come to rudely realize that D.C. has sent Agent Gregorio to investigate their unique way of doing things in the Big Easy.

Ferlito shared with TVLine a look at Tammy’s return to New Orleans, how she will shake things up and the dark secret she is concealing.

TVLINE | Tell me about 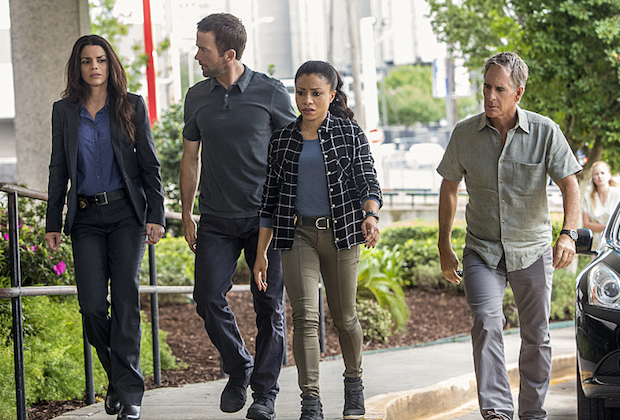 the circumstances under which the team first meets Tammy.
Well, they’re not expecting her. She kind of just creeps up on them and throws herself right into their world. They dont really know why she’s around, but once they find out, they’re not very happy about it.

TVLINE | I can imagine. Nobody likes a stranger getting up in their business.
Yeah, yeah — especially people from New Orleans. They’re very territorial. This is their place and they’re very proud of their city. It’s a very tight-knit community.

TVLINE | My understanding is that Agent Brody’s resignation, in the wake of the events of the season finale, is one of many things that raised red flags for D.C.
Brody (played by exited cast member Zoe McLellan) is out of the picture, but yeah — because of the way they operate at the New Orleans office, everybody in D.C. is a bit skeptical about Pride and his crew. If you’re looking in from the outside, it kind of looks like they’re always up to some shady business. They like to handle things differently, not “by the book.”

TVLINE | Look at the actual office where they work out of, for heaven’s sake!
Exactly! [Laughs] When I first got to the set I was like, “Wow, this is interesting…,” with the kitchen and everything.

TVLINE | Which of the team 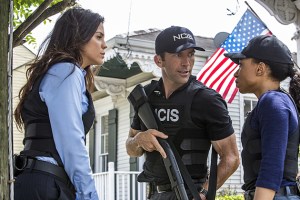 members does Tammy rub the wrongest way? And who takes a relative shine to her?
Shalita [Grant]’s character, Percy — I don’t know what her deal is with Tammy, maybe it’s a girl/girl territory thing? But Pride is so lenient with her. I feel like he is very intuitive, that he knows Tammy is a good agent who is probably going to get really comfortable here and fit in well with them. I feel like Pride is very tolerant of her, how she is trying to not “call the shots” but tell them how stuff is supposed to be done. Even though she is investigating them, you almost kind of forget about that, because they work really well together.

TVLINE | How would you compare Tammy to Graceland‘s Charlie?
Oh, God…. [Laughs] So different. Though, you know what, Charlie is kind of by-the-book, too. She really didn’t break the rules much. It’s so funny, people loved Graceland and when you just mentioned that, it took me back for a second.

TVLINE | Charlie was very nurturing, almost like a mother hen to Graceland’s roommates. Is Tammy the same at all, or is she icy?
She’s a little icy in the beginning, but I feel like around Episode 6 she starts to show a vulnerable side. Here’s the thing: You don’t really know who Tammy is until later on, because she has this secret — and it’s really bad. It’s not really her secret, but she’s carrying the burden like it is, because she’s associated with this person and it ruined a lot of people’s lives.

TVLINE | Will Pride sense that she’s hiding something?
Oh, he knows. That’s the thing about Pride, he plays it real cool, and then he drops it on you — “I knew all about you! Did you think I would let you in here without me doing my research?” He knows that she has a history in New Orleans. I cannot wait for you to see that scene, it is so good. But then she breaks down a bit, because it is really hard for her to be back there. Really, really hard.

Want more scoop on any NCIS show? Email insideline@tvline.com and your question may be answered via Matt’s Inside Line.