When last we tuned into Fox’s Gotham, Jim Gordon was a man on a mission, having emerged from the myriad dangers of Hugo Strange’s lab with a determination to find and win back the woman he loves, Dr. Leslie Thompkins.

Alas, that romantic mission went sideways, hard, it is revealed in the very first frames of the Season 3 premiere (airing Monday at 8/7c).

As a result, “He’s obviously not in a great place” when the action subsequently jumps forward six months, Ben McKenzie tells TVLine. “Jim had gotten a certain amount of clarity, ironically, at the hands of Hugo Strange, and he was really going to find Lee (Morena Baccarin) and bring her back. 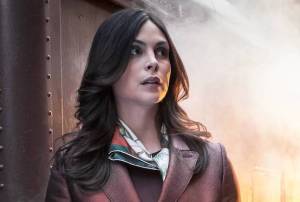 When that didn’t happen, it really crushed him. So he’s now in an aimless, dark place — but ‘dark’ in a ‘bachelor lifestyle’ kind of way.”

Meaning, what is of utmost important to him as the new season unfolds is “getting the money to get the booze to drink to dull the pain,” McKenzie offers. “That’s where he’s at.”

That bender-fueling income now comes from his work as a bounty hunter, someone who’s willing and able to go the extra mile to corral the assorted beasts unleashed during the mass Indian Hill escape, led by Fish Mooney. That new gig will put him slightly at odds with (though his services are privately appreciated by) his old pals at the GCPD.

Jim and Detective Harvey Bullock (Donal Logue) share “kind of grudging respect” under this new arrangement, says McKenzie. “When your friend wants to go off on a bender, you let him go for a certain ways until it gets really, really bad. So Harvey’s just letting Jim do his thing. They’re both adult enough to let each other have that space.”

It is at Jim’s watering 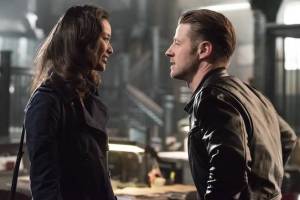 hole-in-the-wall of choice, after collecting his latest bounty, that he is tracked down by and makes the acquaintance of Valerie Vale, played by Once Upon a Time‘s Jamie Chung. Being an intrepid newshound, Valerie has leads Jim could use in pursuing his Moby Dick — meaning, Fish Mooney. But in trade, Ms. Vale insists on tagging along, for better or for worse.

“Jim likes that she’s so aggressive, that she’s so unapologetic,” McKenzie says of the duo’s instant spark. “She almost literally slaps him back into taking stock of his life, and that’s something that a guy in his position can appreciate.”

Gordon has best sober up good and quick, because despite his efforts, the monster menace isn’t abating, especially given the special “power” Fish acquired under Strange’s care, and her desperation to keep it.

“Jim may be at a low point, but the greater goings-on in Gotham with the monsters, the near total anarchy that has manifested, means he’s not going to be able to stay out of it for too long,” shares his portrayer. “He will have to get his feet back in the fire and get back on that horse.”

Yet perhaps just when Gordon is getting his groove back, a fresh wound will be agitated by the return of a very pretty, familiar face.

“He’s got many battles to fight this year, including a battle for the one he loves,” McKenzie previews, adding with a wink: “People dont stat out of Gotham for very long, you’ll see relatively soon!”

VIDEO: Gotham Shocker! Who Will Turn Into [Spoiler]?