In this week’s Fear the Walking Dead, Madison’s desperation to reunite with Nick not only cut Alicia to the quick, it also ushered Strand to death’s door and left in grave danger more than just the hotel’s Yelp rating. What did the anxious mom do that she most definitely shouldn’t have? Read on…

‘AMERICANS… YOU LOVE TO FIX OTHERS’ PROBLEMS’ | As “Pillar of Salt” opened, Francisco fled from the colonia with wife Ana and their daughter in tow. And it looked at first like they just might make it to safety… until they encountered Marco on the road. Since Francisco didn’t have the delivery of Oxy that the thug was expecting that day, the frightened family was, er, taken into custody. Back at the colonia, when Alejandro learned that one of his scouts had deserted, he wondered aloud whether Luciana had known one of her amigos was running away, then seemed to Nick a bit off when addressing the matter with his flock. Later, though the pharmacist forbade Luciana and Nick from setting off to trade Oxy for water as scheduled, the recovering junkie, fearful that Marco would find the colonia in order to find his drugs, couldn’t let it drop. Even after Luciana sided with Alejandro, and the pharmacist/cult leader asked Nick to trust him “like a son” would, the colonia newcomer approached scout Renaldo to sneak out with him after dark and make the trade.

‘I UNDERSTAND GRIEF, BUT THIS IS A BIT EXTREME’ | Meanwhile, at the hotel, while Madison & Co. whipped the newly walker-free joint into shape, Alicia bonded with Hector over their brothers. While Hector’s sib, Antonio, was part of a gang outside of Tijuana — guess which one — Alicia’s was, of course, just gone. And while she missed who he was, “I don’t know that I miss who he is,” she admitted. When a knock at the door interrupted a planning sesh between Strand, Madison, Alicia and Elena, Victor answered it — and was immediately stabbed in the gut by Ilene, who was upset that he’d put her daughter out of her undead misery. Onetime med student Andres quickly ascertained that no organs had been punctured. However, to stitch up Strand, Andres would need supplies that they didn’t have… but that they could get, Elena suggested, from a place she knew of that was just a short drive away. Before setting off with Elena and Oscar, Madison put Ilene under house arrest… indefinitely. Henceforth, however, “if anyone raises a hand to another, they’re out,” she said. “Gone.” Exiled. On the road, Elena explained that Hector’s brother had chosen his gang over his family, and for that, Hector wouldn’t forgive Antonio. 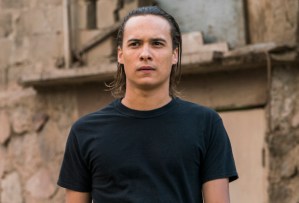 ‘NEXT TIME I SEE HIM, I’M GONNA CUT HIS BALLS OFF!’ | At Marco’s warehouse, Oscar was forced to wait outside while Elena and Madison were admitted to speak with Antonio. The fish they’d brought to trade were good, he said. But the ice that had kept them fresh would be even more interesting to Marco. While the women’s shopping list was being filled, they overheard Marco questioning Francisco and Ana about the colonia. When Elena translated something about an American boy “with ratty hair,” Madison burst into the interrogation room and pleaded for info about the person she was (rightly) certain was Nick. Miraculously, even after that, the women not only made it out alive, they made it out with the supplies that Andres needed to save Strand. Elena encouraged Antonio to join them at the hotel, but he considered the gang his family. So don’t come back, he said. “We won’t be here much longer,” anyway. Shortly thereafter, Marco spotted Nick at the colonia through his binoculars. (Was Nick’s vision so good that he spotted Marco, too? Or did I imagine that?)

‘SHOULD I BE WRITING MY WILL?’ | At the hotel, Andres explained that Strand’s wound had left his heart without enough blood to pump to all of his organs. When Alicia refused to reassure Victor that everything was going to be OK, they bonded over their mutual dislike of sugarcoating. The teen went on to open up about having had to raise herself. Even now that it was just her and Madison, though, “I’m still not sure she actually sees me,” she said. “Then make her,” Strand replied. Easier said than done. When Mom returned that evening, she immediately — foolishly — switched on the hotel’s lights in hopes of sending a beacon to Nick. Understandably, Alicia was livid. Not only had her mother nearly blown the trade with Marco — and doomed Strand — over Nick, now she was putting them all in danger for her son’s sake by flashing, in essence, a “Come and get it!” sign for all the world to see. “Your child is always your child,” Maddie argued. “I’m your child!” Alicia replied, desperate to know why her loyalty didn’t mean as much to her mom as Nick’s disdain. As they argued, off in the distance, someone did get Maddie’s “message.” It wasn’t Nick, though, it was Travis — with no Chris in sight.

‘I’M A HARD WOMAN’ | Meanwhile, we learned that Ofelia had indeed made off with Strand and Madison’s getaway truck. Unless my map-reading remains as bad as it was in high school, she was headed for Santa Fe in hopes of finding Will, the boyfriend whose proposal, in less apocalyptic times, she’d been reluctant to accept, for it would have meant relocating and leaving behind her parents. In a second flashback, as Griselda described the sacrifices that she and Daniel had made in order to save their daughter from a life of fear, we saw pretty much the moment that Ofelia decided that she couldn’t abandon her folks.

So, what did you think of “Pillar of Salt”? Does anyone not share Alicia’s outrage over the way that Madison favors Nick? Do you think Travis left Chris behind… or worse? Hit the comments!