CBS has a formula for its dramas, and it works: Combine an old-fashioned crime procedural with new-fangled gadgetry, and watch the syndication bucks roll in. It’s been a winning strategy for them since the original CSI debuted a decade and a half ago, so you can’t blame them for going to that well one again with Bull, a slick new legal drama that fits in perfectly with the CBS brand… for better or worse.

The big selling point of Bull (premiering Tuesday, Sept. 20 at 9/8c) is star Michael Weatherly, who’s fresh off a winning, 13-season run on TV’s most watched drama, CBS’ NCIS. With Bull airing directly after NCIS on Tuesday nights (smart move, schedulers!), it should get off to a healthy ratings start from millions of fans eager to see what’s next for the erstwhile Agent DiNozzo. But will they be as entranced by a character whose cockiness is not as balanced by schoolboy charm? 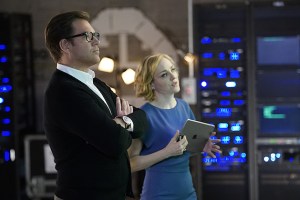 Loosely inspired by the early career of TV shrink Dr. Phil McGraw, Weatherly’s Dr. Jason Bull  is a master of “trial science,” psychologically analyzing juries and witnesses to help attorneys win cases. His team at Trial Analysis Corporation (known as TAC, because CBS shows love a good acronym) utilizes gee-whiz technology to pinpoint each juror’s tendencies and manipulate them to help deliver the verdicts their clients are paying top dollar for. As one TAC team member crows, “the way to win is to know your jurors down to their neurons.”

It’s a cynical way to look at our justice system, but the win-at-all-costs pragmatism rings true, and Bull efficiently grafts all the high-tech mumbo-jumbo onto a basic TV courtroom drama. In the pilot, when a billionaire’s son is charged with murder, Bull’s team runs dozens of mock trials, monitoring each “mirror” juror’s reaction with cameras and hand scanners. Before the trial even begins, Bull knows what kind of juror will vote to acquit — and what approach they need to take to win.

The son’s high-priced lawyer dismisses Bull’s approach as “woo-woo psychology,” but it’s undeniably fun (if a little creepy) to see Bull dig around inside the psyches of jurors, seeking a weakness to exploit. Bull’s own psyche, though, remains a mystery. We do hear something about a messy divorce, and he has an awkward moment of vulnerability with a juror at the very end of the pilot. But, at first blush, he’s all swagger and sarcastic quips.

Bull‘s supporting cast of investigators don’t get to make much of an impression; they mostly pop up to breathlessly rattle off science-geek dialogue and then disappear again. (I was excited to see Freddy Rodriguez, so good on Six Feet Under, as one of Bull’s legal-eagle helpers. But even he fades into the background.)

And as interesting as Bull‘s juror-research aspects are, the actual courtroom scenes are over-the-top, with witnesses arguing with lawyers (and, in one case, assaulting them) from the stand. But that’s not surprising, since, ultimately on this kind of show, character and nuance take a backseat to The Formula. Find the killer, crack some jokes, come back again next week. Bull might offer a cool new tweak to the TV legal drama… but it leaves the tried-and-true CBS blueprint untouched.

THE TVLINE BOTTOM LINE: Fans of CBS procedurals should give this Bull a ride, but everyone else can steer clear.