With the new season comes a new home for Disney Channel’s newly christened Liv and Maddie: Cali Style. And with that big move comes big changes, for everyone.

In the Season 4 premiere, “Sorta Sisters-a-Rooney” (premiering Friday, Sept. 23 at 8/7c) the twins (played by Dove Cameron and Dove Cameron) have relocated from Wisconsin to California, where Liv will pursue her acting career and Maddie has been accepted into her dream college on a basketball scholarship. There, they bunk with their ingenue cousin Ruby (Lindsey Donzis) and her mother.

Soon enough, the comedy’s final season turns into a big ol’ family affair as Kali Rocha, Joey Bragg and Tenzing Norgay Trainor reprise their roles as Karen, Joey and Parker. (Dad Pete has stayed behind to coach a college hoops team and oversee the rebuilding of the comically collapsed family home.)

In the exclusive video above, cast members familiar and new offer a fun look at Liv and Maddie‘s new “Cali style” lifestyle, which will have a distinct effect on every Rooney kid.

“I think Maddie has the hardest time adjusting. She is truly a stranger in a strange land,” series co-creator Ron Hart tells TVLine. “Luckily she has Liv and [best friend] Willow (Jessica Marie Garcia) with her in L.A., but her boyfriend is back in Wisconsin and she misses her old life.

“The homesickness really hits her around the holidays,” Hart previews, “when the local mall lights up a palm tree for Christmas.” 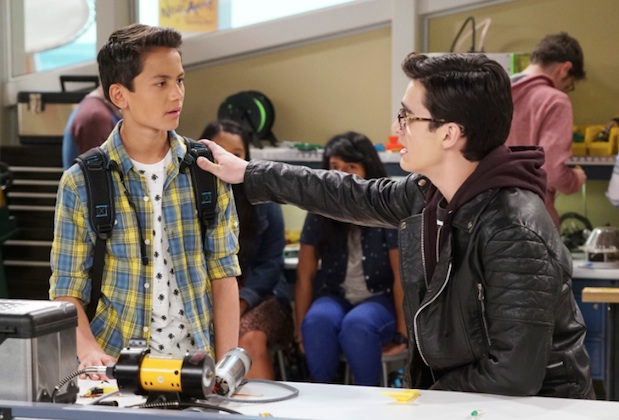 experiences the most culture-shock. “He’s used to being the ‘cool kid’ in Wisconsin, but suddenly he’s not even the coolest guy in his own house,” says co-creator John D. Beck. “He also for the first time realizes he’s in a full-on ‘flirtation-ship’ with Val (Chloe East),” an academic rival as his new school.

Yes, you read the above right: Joey is now cooler than his kid bro, as he goes through his own “big changes” out West. “He was never very happy with how kids looked at him back at Ridgewood, so he decides to completely reinvent himself at his new school as a confident, cool persona named ‘Falcon,'” says Hart.

Said persona will fold in Bragg’s real-life experiences as a young kid doing standup comedy in Northern California. “That’s actually how we first were introduced to Joey — as a 12-year-old killing at grown-up comedy clubs,” Beck recalls. “Of course he had to sit outside in the alley until his set was up, because he wasn’t old enough to hang out in the club, but he stuck with it and the rest is history.”

Also on tap for Falcon, er, Joey, “is the lingering question of exactly what his relationship status is with Willow,” Hart adds.

Will your rugrats (and or yourself!) be tuning in for “Cali style” Liv and Maddie?