When we first laid eyes on Don’t-Call-Me-Angus MacGyver, he was sporting a ridiculous pom-pom hat while scaling a cliff to track down a stolen missile, which he proceeded to defuse using, yes, a paper clip.

Jump ahead almost exactly 31 years, and paper clips prove as handy as ever, as demonstrated multiple times in CBS’ higher-octane reboot (premiering Friday, Sept. 23 at 8/7c).

With Lucas Till (X-Men: First Class) inheriting the role immortalized by Richard Dean Anderson, Mac remains averse to guns, though now he has some pistol-packing muscle at his side, in the form of Jack Dalton (CSI’s George Eads), beefed-up here as former CIA. Along with a requisite computer whiz, 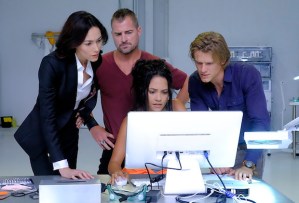 they answer to Patricia Thornton (House of Cards‘ Sandrine Holt) as agents with the Department of External Services (or DXS).

The CBS reboot promptly establishes Mac as a guy who can dress up as well as get down and dirty, fending off baddies with fisticuffs or Frisbee’d drink trays. Akin to the original series, there is much voiceover to open the pilot, as Mac schools us on his particular mission as well as talks us through hacks he employs with along the way. (In 2016, “MacGyverisms” now come with on-screen call-outs, in case you want to shop online for hexamethylene diamene.) It’s almost shameless how quickly Mac plows through the “classics,” including using soot and packing tape to lift a fingerprint, and I’m still unsure of what principle he uses exactly to outwit a biometric scanner. But these quick fixes remain a good part of the fun. 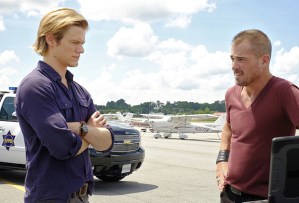 Till rightly comes across as effective and never intimidating, charming in an unassuming way. He enjoy an easy chemistry with Eads, who brings a well-modulated intensity and unquestionable physicality to his role (though Dalton’s ability to bed anything that moves is noted one too many times). Holt is well-cast as Thornton, but gets too few notes to play in the pilot (with almost all of them in response to Dalton’s “bro” antics).

Displaying swagger as well as glimpses of genuine warmth, Tristin Mays (The Vampire Diaries) brings something fresh as Riley Davis, an incarcerated hacker the team springs from the clink to replace the tech analyst (Revolution‘s Tracy Spiridakos) they lose to an obvious plot twist. Fresh from his Rush Hour run, Justin Hires again is doing Chris Rock Lite as Mac’s roommate Bozer; oblivious to his best bud’s true occupation, and spending his own days as a chef, the character screams “dead end,” with storyline momentum screeching to a halt each time Mac stops home.

The new MacGyver of course had a wild ride to the airwaves; CBS greenlit the series in May, only to jettison almost all of the original pilot (save for Till and Eads) and ultimately bring on Hawaii Five-0′s own “rebooter,” Peter M. Lenkov, to give it a retooling. Centered around a full-time team of operatives, it deviates from the comparatively “lone wolf” nature of the original, though that’s not necessarily to its detriment; it simply makes it more familiar, CBS procedural-y. And while some are carping that Eads’ character in essence arms Mac with a gun, I’m pretty sure Dalton didn’t fire a single bullet (to kill or maim) in the premiere.

THE TVLINE BOTTOM LINE: Purists won’t dare call it an upgrade, but the new Mac is definitely a slick (and fun) “Version 2.0.”