“Is Donald Trump fit to be president?” It’s a question Americans will be asking themselves until Election Day — and it’s one Dr. Mehmet Oz attempted to answer on his show Thursday.

“The health of the candidates has become a front-and-center issue in this campaign, and the call for transparency has never been louder,” Oz began at the top of the hour. “We’ve also invited Secretary Hillary Clinton, and she’s considering.”

Oz began by asking Trump what he does for exercise, to which Trump implied that merely speaking to a crowd in a hot room is a “pretty healthy act,” likening it to a sauna. “I guess that’s a form of exercise,” Trump concluded. (This would have been a good time for Oz to challenge Trump’s claim, but he decided to go the Matt Lauer route and let it slide.)

Next, Oz asked Trump a series of basic questions about his health. The 6-foot-3, 236-lb. candidate admitted to being on a statin to treat his high cholesterol, but boasted about his other high-functioning facilities. “I try to stay out of the sun for the most part,” he said when asked about his skin. “I’ve had no major problems.”

Then, the big moment finally arrived. Trump whipped out a letter from his doctor — “respected guy, good guy” Dr. Harold Bornstein — with a breakdown of his latest physical. Click on the thumbnail below to see the full-sized document: 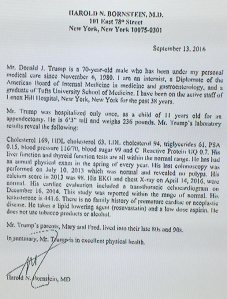 “If a patient of mine had these records, I’d be really happy and I’d send them on their way,” Oz said after analyzing the documents in full.

When asked why he didn’t release his records sooner, Trump replied, “I didn’t think it was necessary. The public’s known me for a long time and they’ve never seen me in the hospital. I had my appendix out when I was 11, and that was the last time I was in a hospital. That was a one-night deal.”

The allegedly hard-hitting episode softened further with a visit from Trump’s daughter Ivanka, who waxed poetic about what a great grandfather he is. She even defended her father against the “false narrative” that he doesn’t respect women.

“I think I could lose a little weight,” Trump finally concluded in the episode’s final segment. “I’ve sort of always been a little bit this way. It’s tough because of the way I live, but the one thing I would like to do is to drop 15 to 20 pounds.”

Did Trump’s appearance on Dr. Oz appease your concerns about the candidate’s health? Drop a comment with your thoughts on the special episode below.