Did Beauty and the Beast live happily ever after?

The CW’s version of that tale as old as time came to a close on Thursday night, with VinCat out to 1) prevent Braxton’s bombing of the final cabal member, a crown prince, and 2) take down Braxton himself, to stop once and for all the manufacture of beasts.

First, Vincent and Catherine “cozied up to” the prince’s assistant, convincing him that his boss was in great danger. That gave them access to the prince’s travel route into the city from LaGuardia. We spied Braxton, meanwhile, crafting an explosive that was attached to a powerful magnet, which he then hid beneath a small manhole cover, somewhere.

Left (for the first time in a long time!) with nothing to do but wait, VinCat went about with their not-so-stealthy goodbyes — starting with Heather, who caught her sister preparing a Last Will and Testament. Many tears were shed (by Heather) as Cat explained her wish to see her sister move on with her own life once the beast business is behind all of them. And to that end, she has prepaid Heather’s lease and signed over her car.

Vincent meanwhile surprises J.T. with a top-of-the-line laptop, to replace the equipment he sold away weeks ago. But J.T. sees it for the farewell gift it is, grumbling that although the “brothers” knew this day was coming, it doesn’t make it any easier. Tess doesn’t handle the inevitable much better, refusing to say the G-word to her BFF.

With that blast of emotions out of the way, Vincent and Catherine resume their plan, “blurring” themselves into the prince’s limousine to explain the dire situation, just before his convoy heads onto the targeted Queensboro Bridge. They abruptly drop off the prince and his driver, then drive the limo onto — and then sharply off of! — the bridge, just as the bomb that had [Clunk!] attached itself minutes earlier exploded, with the vehicle midair halfway to the river. J.T. watched in horror, knowing that Vincent and Catherine were inside.

And yet of course they weren’t. Which might have been a tiny surprise had they not just reminded us of Vincent’s “blurring” power earlier in the scene. 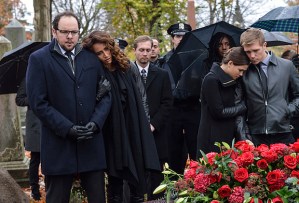 about intercepting Braxton at the getaway jet, putting a few fatal bullets into the baddie. She, J.T., Heather and Kyle (who I thought for sure would be revealed as a beast!!!) days later gathered for the funeral of their loved ones. Afterward at the cemetery, though, J.T. was approached with a plum job offer by a man who had been sent by Vincent… days earlier, yet with the funeral’s place and time already in hand. Hmmm. Heather meanwhile discovered that the wigs and burner phones she bought for VinCat had gone missing.

Months (?) later, we see Vincent and Catherine taking a carriage ride through Paris, en route to a cafe where Vincent has an anniversary surprise waiting for his wife — Tess, J.T. and Heather! And no sooner have they all gotten caught up on who is living in sin with whom back home, than Vincent and Catherine dash out the door to stop a random purse-snatching.

What did you think of B&TB‘s bon voyage?