And just like that, emerging naked from a duffel bag in Times Square doesn’t seem so bad after all.

Blindspot returned for Season 2 at a special time Wednesday night — before moving to its regular 8 pm home next week — and somehow, the episode managed to make Season 1 look like a stroll through paradise.

Having her identity wiped and her body inked? Playing a major role in the death of an FBI director? Killing her former fiancé and getting arrested by her new beau? Compared to what Jane Doe experiences in the opening minutes of Season 2, all of last year’s hardship seems positively peachy — and we haven’t even touched on the family reunion that takes place near the end of the hour.

Below, a breakdown of the episode’s biggest moments:

WHERE IN THE WORLD IS JANE DOE? | As series creator Martin Gero teased to us at Comic-Con, the premiere picks up three months after last May’s high-stakes finale, and Jane’s life — which I had assumed was already at rock-bottom — has somehow gotten even gloomier. Having been taken into CIA custody shortly after Weller arrested her, Jane has been holed up at an Oregon black site all summer, where she experiences daily torture at the hands of her captors. But Jane, arguably the biggest badass on NBC, is slow and sneaky about her planned escape — and when she gets an opportunity, she beats up all of the men tormenting her and snags the keys to a truck that takes her far, far away from Oregon. (Camden, N.J., to be exact.) 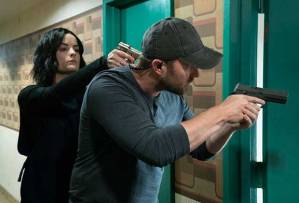 Meanwhile, Weller and his FBI cohort have resumed their run-of-the-mill, pre-Jane missions — y’know, boring assignments that involve taking down counterfeiters by way of epic bike chases. But just as Zapata and Reade begin to wax nostalgic about the thrilling tattoo investigations of yesteryear, a helicopter touches down at the site of their latest arrest, and out walks… Kalinda Sharma! Er, Nas Kamal, rather, played by The Good Wife‘s Archie Panjabi. (But she and Kalinda have strikingly similar fashion sense, no?)

Let’s get Nas’ spiel out of the way first: She’s the director of an off-books branch of the NSA, called Zero Division, which has been tracking what seemed to be disparate terror attacks for the last six years. Over time, though, it’s become clear that those incidents are all stemming from the same group: Sandstorm. Nas and her people believe that Jane is also a Sandstorm operative, and was sent to the FBI via duffel bag to take the bureau down. Though it’s suspected that Jane was planning to betray her Sandstorm team before she got all those tats, she’s still very much entangled with the group, who is readying its biggest attack yet — and if the NSA and FBI can find Jane, they could very well stop Sandstorm, too.

That said, neither the FBI nor Jane are thrilled about working together again. Consider this the CliffsNotes version: Once Jane is tracked down, working as a maid at a New Jersey motel, she and Weller come to blows over their heavy emotional baggage; Reade and Zapata don’t trust Jane, Jane doesn’t trust anybody; it’s really just business as usual. But the FBI team agrees to work with Jane once more, if only to avenge Mayfair’s death.

MAMA WHO BORE ME | After Jane spills all of last season’s secrets to Nas — including her murder of Oscar — she agrees to go undercover within Sandstorm and once again team up with her handlers there to get more intel on their impending attack. She meets up with a Sandstorm operative named Roman (Agents of S.H.I.E.L.D.‘s Luke Mitchell), and together, after making their way through a harrowing traffic stop and a trip to the hospital, they come face-to-face with the elusive Shepherd (The Glades‘ Michelle Hurd), who is said to be the ringleader of Sandstorm’s next mission.

Well, it turns out Shepherd is a liiiittle more than just the head honcho of a terror group. She’s also Jane’s mother.

Long-awaited backstory alert! As Shepherd informs a shell-shocked Jane, Ms. Doe’s actual name is Alice Kruger. Jane was born in South Africa (which explains the tooth, at last!), but when the government had her anti-apartheid activist parents killed, she was forced into a secret “academy” — an orphanage where children were trained to become operatives for the state. 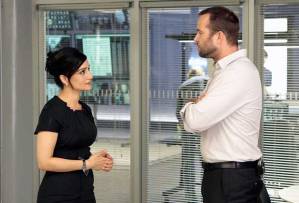 The academy ultimately fell when apartheid did, and Shepherd was the American soldier who liberated Jane — uh, Alice — and a boy from the orphanage, as well. As they grew up, the kids were allowed to pick their own names. Alice chose “Remy,” and the boy chose “Roman,” making the Sandstorm handler Jane’s brother. Whew.

Shepherd and Roman tell Jane to stay the course with the FBI, ensuring her that their mission is nearly done, whatever it is. But later, when Jane’s mother and brother are debriefing about their conversation with her, Shepherd admits that something seems off about Jane. “Then activate our mole in the FBI,” Roman suggests, defending his sister. “And they’ll tell you.” Shepherd dismisses the idea, saying that the Sandstorm mole is a card they should wait to play at the FBI. But in the meantime, who is it?! (I, for one, will be devastated if it’s Dr. Borden, which means it probably is.)

Even worse: As Shepherd and Roman cryptically talk about their plans for Jane, they are seen standing near a massive missile, surely to be used in Sandstorm’s upcoming attack.

THE X-FILES | Meanwhile, as Jane is busy dealing with the worst day of her life (so far), Patterson introduces Nas to the USB drive that was uncovered in last May’s finale. There are three files inside: one labeled Daylight, an operation that the NSA already knows about; one labeled M7G677, which merely contains a cryptic photo of a black hole (to be revisited in later episodes, surely); and one named Orion, which is merely full of fragmented, pixelated data.

Nas agrees to give Patterson access to the NSA’s quantum computer farm and… actually, I’ll skip right past the techie jargon. The bottom line: Patterson is finally able to unlock the photos hidden on the Orion file. They’re mostly snapshots of soldiers, explosions and other disconcerting events from the past few months — but the team does a double-take when they find a photo of Jane, dressed in head-to-toe military gear, lying unconscious in the desert.

OK, your turn! Do you buy that Shepherd and Roman are Jane’s relatives? Who’s the mole in the FBI? Cast your vote in our poll below to grade the premiere, then hit the comments to back up your choice!