There’s a moment in the pilot for The Exorcist that is so spine-tingling and cool that it actually gave me goosebumps. Unfortunately, the reason the moment is so creeptastically effective has nothing to do with this show — it’s at the end of the hour when “Tubular Bells” from the 1973 movie gets cued up.

I don’t mean that as a dis, either — not exactly. Fox’s take on the horror classic (premiering Friday, Sept. 23, at 9/8c) is a quality production from top to bottom. The cast, led by Sense8’s Alfonso Herrera (as the sexiest priest since Father Dowling) and Geena Davis (in, basically, the Ellen Burstyn role) is top-notch; the directing, sharp; and the effects, far more realistic than when Linda Blair famously projectile-vomited pea soup.

However, it’s inevitable that the series will be compared to William Friedkin’s film — especially when Mike Oldfield is playing, for God’s sake — and the fact is, it pales by comparison. The feature already shocked us. It did its job. And there’s simply nothing new here. So it’s kind of like watching understudies — really good understudies, mind you — put on a show you’ve already seen.

In Episode 1, Herrera’s likable Father Tomas is asked by parishioner Angela (Davis) to speak with Katherine (Scream Queens’ Brianne Howey), the daughter she’s convinced isn’t just a teenager acting out in the wake of a friend’s death but possessed by a demon. No sooner does he agree to do so than — boom, right on cue — a crow flies not in but into the window.

Along the way, we also meet Angela’s husband Henry (Alan Ruck), who’s suffering from a condition that has turned him into, as Kat unkindly puts it, “basically a potato,” and younger daughter Casey (Hannah Kasulka, a dead ringer for an adolescent Lindsay Lohan). 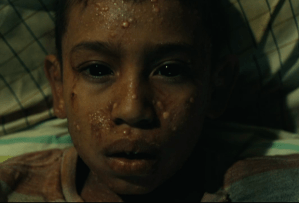 Thanks to a series of convenient dreams about renegade exorcist Father Marcus (intense Ben Daniels from House of Cards) and his attempts to save a possessed boy in Mexico City, Tomas becomes convinced that he should help Angela and her family — just in time for him to have his first demonic run-in. And, admittedly, there’s a cool surprise to it.

The thing is, it isn’t enough. This is all perfectly interesting. It just isn’t… compelling. So, as competently crafted as the drama is, the best I can do is damn it with what sounds like faint praise.

THE TVLINE BOTTOM LINE: If you tune in and get all the way to “Tubular Bells,” trust me — you’re going to want to Netflix the movie. But save yourself an hour and, instead, just do that now.