File the following items under “Things I Can Never Look At the Same Way, Thanks to BrainDead“:

CBS’ political comic-thriller has offered up 12 weeks of weird, wacky and wonderfully satirical summer television — but as the fate of the series hangs in the renewal/cancellation balance, did Sunday’s season finale provide closure?

The short answer: Yes. Over the course of two hours, Laurel found a way to draw out Red’s Queen Bug, Luke got the political upper hand over the Republicans and it seemed our long national nightmare was, at last, over.

Then again, if BrainDead should score a second go-round, the last few seconds of Sunday’s finale did leave the door cracked for another insect revolution. But I’m getting ahead of myself here. Here’s a closer look at the questions that were answered in the two-hour season ender:

SO… WHAT’S UP WITH RED? | After his dear queen got whacked and injured by Laurel, Red is in no state to govern. He’s barely speaking coherent English during Senate meetings, he can’t get through a sentence without crying and he’s snorting dried seaweed in an effort to get his brain-bug healthy again.

Ella, disgusted by Red’s behavior, threatens to take over their political schemes now that he can’t pull himself together. But when Ella comes to Red’s office and brandishes a gun in his face, ensuring the senator that it’s easier just to end his life than fight him in the Senate, she and Red tussle — and Red ultimately grabs the weapon from Ella, shooting her right on his office floor. Once she’s dead, Red’s queen crawls out of his ear and kills Ella’s queen… and just like that, Red is feeling much better. 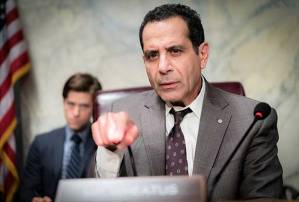 WHAT’S IN THE FARM BILL? | Luke, leaning heavily on some fantastic improv skills, manages to delay the Senate’s vote on the budget by staging a sit-in with his fellow Democrats. (The more you imitate real-life politics, BrainDead, the more I love you.)

With the help of Cole, budget translator extraordinaire, Luke discovers that the Republicans’ pesky farm bill contains a provision for $108 million worth of glass. And why? Well, those internment camps that are being constructed across the country — they’re not internment camps. They’re hothouses being built to grow more cherry blossoms, which is how the alien bugs spread.

Despite Luke’s best attempts, his motion to carve out the farm bill from the budget and vote on it separately gets denied again and again. So, if you can’t beat ’em, join ’em: Rather than get the farm bill shot down on its own, Luke ends up writing a separate bill, regarding motorcycle helmets, that will ultimately override Wheatus’ farm bill. In other words, those hothouses? Not gonna happen. Check and mate.

(As for the cherry blossoms still sitting pretty across D.C.? Rochelle researches a fertilizer, made with ammonium nitrate, that should cause the trees to shed their flowers — and spraying it across Capitol Hill’s trees goes off without a hitch. The blossoms fall to the ground, Rochelle and Gustav celebrate and — oh, yeah. Turns out Gustav works for the NSA. This explains so much.)

HOW DO YOU STOP THE BUGS? | That only leaves one last task: luring out Red’s queen and killing her, which should cause the other bugs across D.C. to fall. But how?

In an emotional conversation with her infected father, Laurel reprimands her dad for being so hard on Luke when he lost his first election years ago — and the moment Dean starts to feel guilty for how he acted toward his son, the bugs in his head begin to crawl out. It seems the way to aggravate the bugs is to make their victims feel shame (shame, shame, ding-ding-ding!). After all, shame is the most deep-seeded human emotion — and if getting drunk, eating chocolate and having sex can get the bugs out, surely something as human as shame can really do some damage.

Surprisingly, the thing Red is most ashamed about is a former love. After doing some research with Gareth — and more on their relationship in a minute — Laurel discovers that Red was in love with a woman who worked in his college dorm and was an illegal immigrant. Torn between his love for Lana and his Republican views on immigration, Red turned her in to the authorities and had her sent to Guatemala. What’s more? She’s dead now. (And that’s why Red has taken to calling Laurel “Lana” all this time.)

As Laurel taunts Red with this story of his lost love — hoping to get him feeling ashamed enough to lure out the queen — the senator gets fed up and points a gun in her face. But Gareth, interrupting at just the right time, tackles his boss to the ground, and Red gets shot in his rear end during the tussle that follows. The queen flies out of his cranium, and just as she’s about to escape through Red’s office door, Gary the intern walks into the room and innocently crushes the bug under his heel. (You’re worth so much more than coffee runs, Gary!)

As expected, the alien bugs kickin’ it in politicians’ brains begin to emerge, skittering through the halls of the Capitol building and flocking to their fallen mama to die. “That’s kinda gross,” Laurel correctly observes, and as Red comes out of his insect-induced stupor, it seems D.C. can finally resume its normal state of chaos. 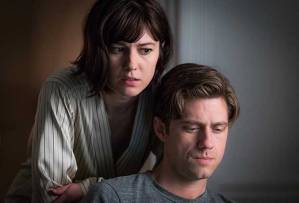 WHAT ABOUT LAUREL AND GARETH? | That faint clicking sound you hear? That’s the sound of every TV journalist updating their list of Most Adorable TV Couples. (And the most infuriating, too.) Throughout these final hours, Laurel and Gareth oscillate between breaking up and planning a life together. First, Laurel announces she’s headed out of town next week to resume work on her recently funded documentary. But wait! Gareth drunkenly proposes. But wait! He was just joking. But wait! Laurel is staying in town until the bug apocalypse is stopped, and she wants to be with him. Ugh, you kids.

In the end, the ol’ “opposites attract” adage proves true, and Laurel and Gareth admit they love one another before starting a real relationship together. (It turns out they’re on different pages about politics and having kids, but I choose to believe they’ll work through their differences. #Laureth4Eva)

As for the rest of those unresolved plot lines? Well, I’ll let resident musical recapper Jonathan Coulton handle that, with the lyrics to his season-ending epilogue:

Some things got much better while some other things got worse
Let’s tie up some loose ends while the space bugs all disperse
All the head explosions notwithstanding, mostly everything turned out all right

Laurel’s leaving politics, she’s tired of D.C.
Someday, she might finish her dream documentary
She and Gareth got a place together, they kiss and canoodle every night

Red made some mistakes but never really paid the price
Stayed on as a senator, got reelected twice
Easily distracted, not intelligent
As such, turns out having half a brain just doesn’t matter all that much

Same for all the senators
Who needs a perfect brain?
Powerful and stupid, but at least they’re not insane
Somehow everything still holds together
Even when it’s running off the rails

Dean lost something precious, and it really took a toll
He’d gladly trade his Parkinson’s for partial mind control
So, the ending isn’t perfect
But at least there’s love and kindness when it fails

You can vote your conscience, you can vote to make a point
But cut-and-dry, your principles have smoked ‘em like a joint
Though we rarely rise to be the best that we can be
Just stand up and be a citizen, it’s called democracy

Luke was forced to leave but got a better offer right away
Wall Street firm with slightly fewer principles and higher pay
Laurel came to help him right before another market crash
When everyone was long on risk and dumbly, sadly short on cash

But that’s another story that they’ll write someday, I’ll bet
And as for all the space bugs, well, so far, nobody’s seen them yet.

And just as Coulton walks past a cherry blossom tree, a new queen bug takes flight and whizzes straight toward the camera. So… maybe it’s not quite over.

That’s a wrap, BrainDead fans. What are your thoughts on the finale? The season? Your hopes for renewal? Cast your vote in our poll below, then hit the comments with all of your thoughts!