If there’s one thing that Garry Ripka finds more nerve-racking than fishing for Dungeness crab in “the Graveyard of the Pacific,” it’s knowing that, once Deadliest Catch spinoff Dungeon Cove premieres Tuesday (Discovery, 9/8c), he’ll be doing it in front of an audience of potentially millions.

“Sleepless nights have been happening the more I think about it,” he admits to TVLine. “It’s on my mind a lot, I’ll put it that way.” Here, the veteran skipper previews the Season 1 premiere, discusses his challenging working relationship with son and fellow captain Kenny, and reveals the most dangerous part of their job.

TVLINE | When you were approached about doing this show with Kenny — and sort of giving the whole world a ringside seat to your squabbles — how did you decide to just go for it?
When the opportunity came up, we had a family meeting, because it’s not just me, it affects the whole family. So we sat down and said, “There’s going to be a lot of Monday-morning crab-captain quarterbacking going on after this, you’ve gotta be a little bit thick-skinned.” I know I watched Deadliest Catch, because I [fished the Bering Sea] for four, five years, and I’d say, “Why’d they do it that way?” But you have to just let it roll off you. One thing we are excited about is, my dad is in his 70s. I’ve been out fishing with him but not crabbing. So I’m excited that my family is going to get to see me doing my job.

TVLINE | Like home movies with way better camerawork.
[Laughs] Yeah, so they’ll get to see me at my best… and probably some of my worst!

TVLINE | Speaking of your worst… it doesn’t always seem in the first episode like you actually like working with Kenny. Do you?
Oh yeah, I like working with him. I just… you know… we have two different approaches to things sometimes. I’m pretty aggressive, and I’m old school. [My attitude is,] I don’t care about anything, just get it done! It’s a generational thing. I’m always pushing him to do his best. I want him to get better at it. 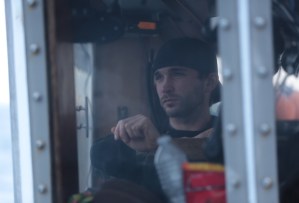 TVLINE | How pissed were you that, when he stopped working for you, he went and worked for your rivals, the Rutherfords?
That was kind of a different time. But if he wasn’t going to fish with me, I wanted him on a good, safe operation, and that’s what they are. I’ve always said, if you want your sons and daughters to be lawyers and doctors, you send them to Yale or Stanford or Princeton. But if you want them to be commercial fishermen, you send them to the Rutherfords. I looked at it that way. [Eventually,] I realized we’d come to a crossroads where either he was going to be involved [in my operation] or not. There were some challenging things about it, but overall, in the end, it turned out to be a better thing. The grass isn’t always greener.

TVLINE | You seemed to have a really hard time telling Kenny “Good job” after he “crossed the bar.” Is doing that not as scary and dangerous as it came off?
No, it’s a very dangerous thing. It’s the most dangerous part of this job. It’s a very narrow strip of water where you’ve got rocks on both sides and, in the wintertime, big swells coming at you straight on. Crossing the bar is a tricky deal, and it takes a lot of experience. I’ve got that experience, and he’s still learning. But it’s a fine line between being too cautious, which will cost you money, and something bad happening. A lot of times, things are out of your control. That’s a tough one. You have to learn to deal with it, and a lot of times, people never do. That’s the difference between people who do well and people who don’t.

What do you think, Deadliest Catch fans? Will you be tuning in after a new Deadliest Catch: The Bait (8/7c) to get acquainted with Ripka and the other captains of Dungeon Cove?