Game of Thrones’ Richard Madden is shooting for the moon with his latest TV gig.

TVLine has learned exclusively that the actor formerly known as Robb Stark has signed on to star in Strange New Things, Amazon’s ambitious drama pilot set in outer space. Based on Michel Faber’s celebrated 2014 novel The Book Of Strange New Things, project — which is being eyed as a 10-episode event series — centers on a soulful, intense priest (Madden) who leaves his wife 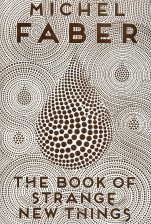 to travel to a distant planet/colony to preach to the native population.

Earlier this year, our sister site Deadline described the project as “a heart-wrenching love story of a husband and wife with the universe between them,” likening it to “Heart Of Darkness in space.”

Matt Charman (Bridge of Spies) will pen the pilot and serve as an executive producer, with Kevin MacDonald (The Last King of Scotland) handling directing duties. Andy Harries (Strike Back) and Lila Rawlings (Left Bank Productions) also are on board as producers.