As the first reality dating competition series to feature an all-gay cast, Logo’s Finding Prince Charming is actually pretty historic. But as we all learned from falling asleep during social studies, history isn’t always exciting.

Thursday’s premiere introduced America to 33-year-old interior designer Robert Sepulveda, Jr., accurately described by one of his suitors as “the prototype Disney prince.” And he really is, from his perfectly coiffed hair to his utter lack of enthusiasm. (The fact that he used to be an escort, easily the most interesting aspect of Prince Charming’s past, is never discussed on-screen.)

Unfortunately, this theme seems to be woven into the very fabric of Finding Prince Charming. Of the 15 men featured in Thursday’s premiere, including Robert and host Lance Bass, approximately four of them have personalities. They all do, however, have a portfolio of immaculately filtered gym/beach selfies, which were displayed while the suitors described themselves using a single hashtag — most of which came across like Real Housewives taglines. (Example: #WhyBeANineWhenYouCanBeATen?)

The two suitors who made the strongest impressions, for better or worse, were 31-year-old fitness guru Sam and 26-year-old beauty professional Robby — so, naturally, they went head-to-head in the show’s first official fight. It was basically Sam projecting his own insecurities about his masculinity, accusing Robby of being inauthentic before yelling, “Fix your dress!” at the poor guy, who simply can’t help that he was born a less-southern version of Will & Grace‘s Beverly Leslie.

A next-day pool party offered an opportunity for excitement, but aside from Robert’s big shirtless reveal — the guys’ anticipation was so high that Robert’s gradual disrobing got its own commercial break — the show’s first soiree was pretty uneventful. 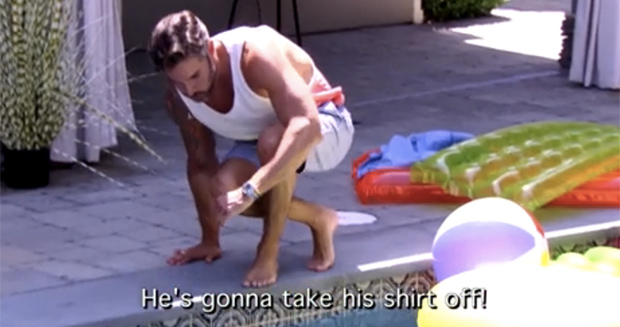 Heck, Robert wouldn’t even tell Lance which guy he thought looked best in swimwear. (Because that’s what we want from reality TV — a gentleman.)

Then came the first eliminations, which — true to form — were also pretty chill. And I can’t say I was surprised to see Charlie, Nick and Brodney get the boot. (I was, however, surprised that Robert had to physically dress each of his picks in a tie. Whose idea was that?!)

* I have a couple of questions about some of these suitors’ names, specifically Jasen and Brodney.

* Could Sam’s feelings for Robby be any more obvious?

* Did Dillon really tell Robert, “I didn’t come to make friends”? This guy was born to be on reality TV.

* How did Robert not giggle when, during a pre-elimination interview, Lance asked him, “Who might be on the bottom tonight?” (I swear, that man is made of wood.)

OK, now it’s your turn to start judging: Grade the episode below, then drop a comment with your thoughts (and predictions) about Finding Prince Charming.