Mistresses fans holding out hope for a Season 5 renewal, take heart: When the show’s producers sat down with ABC brass to discuss the conclusion of summer 2016 run, “they didn’t tell us to make a series finale,” says still-hopeful EP Rina Mimoun, who co-wrote the teleplay for Tuesday’s polarizing cliffhanger with K.J. Steinberg.

Mimoun said she and showrunner Josh Reims are in the process of trying to sell the network on the idea of “a final fling” of 13 episodes to air in 2017. “We really feel like there’s one more year of story to tell, but we’re also looking for a graceful way to wrap up the series,” Mimoun explains, “There’d be some new hot messes in the mix, and we’d be moving back toward the kind of racy romp that Mistresses was when it began.”

TVLine caught up with Mimoun to talk about the decision to kill of Yunjin Kim’s endlessly entertaining Dr. Karen Kim, a popular fan theory about the show’s “mystery woman” cliffhanger and the return of Wilson Cruz’s Dante (and how it relates to the absence of Kate’s sweet roommate/gay BFF Randy).

TVLINE | We have to talk about Karen’s death — and what prompted it. Did Yunjin Kim ask to exit the show, or did the writer’s room decide her character had run its course?
I know you’re not going to believe this, but it was entirely mutual. We came into the fourth season, and Yunjin expressed an interest in moving on to pursue other projects. And we said, “It’s so funny you’re saying this to us now, because we’re fiddling around in the writer’s room with the idea that we want to do something big.” I remember when K.J. and I first began the show, we were still mired in the BBC version of it all, we always said, “If anyone’s going to die on this show, it would be Karen.” We didn’t always know that was the journey we’d take, but when Yunjin expressed an interest in doing other things, we asked, “How would you feel about Karen dying?” We didn’t want to do what we did with [Alyssa Milano’s] Savi, having a character of ours out in the world that we don’t see. And Yunjin was like, “Do it!” She knew Karen was going to die before the first table read of Season 4. She was such a trouper all year, holding in this secret. ‘Cause for a while she was asking, “When can I tell people?” And we said, “Never!” [Laughs]

TVLINE | When Episode 13 opened with her funeral, and you cut to her picture, my jaw dropped. Was the cast just as flabbergasted when they got the script?
No, because this cast has been through a lot. Every year we don’t know if we’ll be back. We’re always shooting in a new location — Disney [Studios], Culver City, Canada, Santa Clarita. And we lost Alyssa [Milano] early [at the end of Season 2] and that was a surprise to all of us. Once you absorb that kind of a shock, you can handle anything. “OK, it’s TV!”

TVLINE | Karen’s been such a beautiful disaster for four seasons — I’ll sleep with my dying patient! I’ll be in a thruple! I’ll wear a hooker wig! I’ll have an affair with my nanny! It really stung to have her life end at the exact moment she’d finally found some happiness and stability: Baby Vivian, new love Adam and her burgeoning career as a sexpert/author. Getting to that place, and then a slip-trip-fall death?
We didn’t want her to be in a sad, tragic place. We wanted her to die heroically. K.J. wrote that eulogy and it spoke to the character so nicely: She died doing what she’d been meant to do all along — by saving someone who needed to be saved. We loved the hot mess that was Karen, but the character felt like she’d gone as far as we wanted to take her and as far as Yunjin wanted to play her, so it felt like the right time. 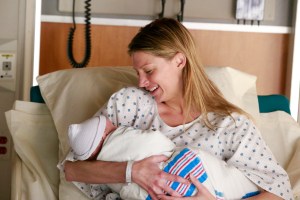 TVLINE | With the last two original mistresses, Joss and April, each happily married and with new babies at the end of Season 4, have you painted yourself into a corner in terms of exciting, scandalous arcs for those characters?
Not at all. We have a 10-page pitch for Season 5. We are not going to suddenly become a show about April and Joss pushing swings on the playground and chatting about breast milk. We want to make a wide left turn that still allows us to stay true to the characters. We’re not going to become ‘the baby show’ if we get another season, I can promise you that. We have some real fun planned.

TVLINE | To that end, what can you tease about this new character who introduced herself as Karen Kim — or should we say Karen Kim 2.0 — in the last seconds of the finale? And is she, as many TVLine readers wondered, Karen’s unstable nanny Lydia following some extreme plastic surgery? And would that character be a series regular?
It’s not Lydia. I’ll give you that much. We can start a new theory percolating because the Lydia one is not it. We would be going into full [Days of Our Lives] “Marlena turns into the devil” territory, which we’re not prepared to do. This is a summer series, but come on. [Laughs]

I don’t think in Season 5, we’re looking to create a whole new series regular. But [Karen Kim 2.0] would be prominetly featured, as would [Harry’s newly discovered adult son] Gabe. Plus, there’s a ton of new characters we want to bring into our world who naturally fit, and a few who’ve been missed, who we’d want to bring back to spark a little fun. We’d do it knowing it was out final season, to be able to tie it off in a way that’s satisfying for the fans. 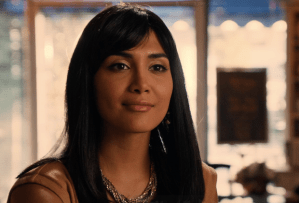 TVLINE | So exactly how outlandish would the “New Karen Kim” arc be?
It’s kind of out there, but it’s more about growing our group of women in the most organic way possible. Despite everyone’s mad hate for the finale — I’m still absorbing it, that’s fine [Laughs] — I love that so many photos that accompany the stories about us show our core group of women hugging or toasting with glasses of wine.

We’ve always been a show about female friendship, and we want that to continue. We were saddled with this title that either made us or broke us. The title was alienating to what could have and would have been our core audience, who was looking for that group of gals thta they missed from Sex and the City. We wanted to provide that wish fulfillment — “Yeah, I wish me and my girlfriends had wine in the middle of the day in my friend’s Anthropologie-esque store! I wish I had a ladies’ night every other day with my four best girlfriends who have all the time in the world to gab about our crazy s–t!” [Laughs] Who doesn’t love that? Who wants to go to the office?

TVLINE | I hope one of the characters you bring back is Elizabeth Grey with a martini.
[Laughs] I always want to bring back Elizabeth Grey. And Penelope [Ann Miller] is always down for that!

TVLINE | Last question: The finale felt like you were perhaps setting up Wilson Cruz’s wardrobe stylist Dante as a possible new mistress. Is that a possibility?
Oh my God, I want Wilson on the show so badly. I fell in love with him when we worked together on Red Band Society. He is just the best — and the scene between Tabrett Bethel’s Kate and Wilson gave us a jump into a place that could be a lot of fun, if we were able to get him as recurring next year.

TVLINE | Is that at the exclusion of Kate’s endearing gay roommate Randy? Because when April started talking to some new female employee at Maison Sur Mer, I was like “Where’s Randy? And who is this rando?!”
Our actor who plays Randy [Brian Gattas] was out of town when we shot the finale. But don’t worry: Randy still works at the store!