As CBS’ Zoo closed Season 2 on Tuesday night, one of our heroes aimed to take one for the team, in the name of the greater good.

Arriving on Pangaea, Robert Oz introduced Jackson, Abe and Dariela to the scientists running the super-secret Shepherd facility, which for a very long time has been working to develop a cure for the returned animal mutation.

Mitch and Jamie meanwhile aimed to steal the stash of “clean” DNA that General Davies aimed to use to repopulate the animals — and got an unexpected assist from Logan, who amazingly survived his unconscious plunge from the jet. Intercepted by Davies, Jamie and Logan destroyed the DNA, after which a Sgt. Mansdale killed the general, in the name of getting Mitch & Co. to their friends in Pangaea.

With everyone reunited in Pangaea, Mitch and Robert teamed to complete the cure, but were stymied by a lack of success. Ultimately — and I’m admittedly fuzzy on WTF exactly transpired! — a transfusion from Robert to his son generated enough “compound” to serve as the cure. Jackson’s father, however, expectedly died during the process.

Birds were then given the cure, to disseminate across the globe. But just as they were set loose, Jamie realized that the Noah Objective had been launched after all, even though it would kill all the animals, which now can’t be restocked, as well as any human with the ghost gene  — Mitch’s daughter Clementine included. Turns out, the Shepherd scientists were actually complicit with the Noah Objective…?!

Mansdale resurfaced at Pangaea to lock up the heroes in a cage that served as a “food bowl” for the “Section K” mistakes created by the Shepherds over the years. Mitch & Co. managed to escape the super-feral, spiky-backed, wolf-like beasts and return to the jet, only to realize that the bad guys had looted their lab of everything, the fossil genome included. Mitch and the others bravely returned to the island bunker to retrieve the last bit of cure, but when the Section K beasts started surrounding the place and compromising the fences, Mitch sent the others back to safety in the jet, while he stayed behind “for a minute.”

Mitch would not, however, rejoin them as promised, but instead called Abraham to reveal his intention all along — to sacrifice himself while keeping the fences powered up, so the jet could safely take off and get the cure to, among others, Clementine. 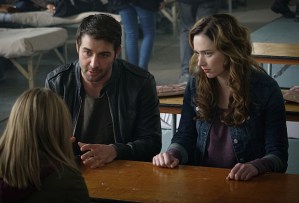 tracked down Clem at a Portland evacuation shelter, where the masses were convinced that the animals were still wild. But as Abe demonstrated to them after befriending a wittle puppy, the animals had returned to normal — a twist for which the IADG took credit, hmmph.

Jackson and Jamie broke the news to Clem that her father died, but not before he set in motion the cure for the animals. Back on the jet, Jamie pressed Logan for his true name and backstory (Edward is a Wolverine fan!), while Jackson hacked into his father’s email to discover that the final TX gas formula Robert sent Davies contained the same element that sterilized the mutated animals back in 1895. Except that since the animals were now protected from it, the dispersed gas had sterilized humankind!

Flash forward 10 years… and proud Abe and Dariela’s son Isaac is graduating from a grade school that will now shutter its doors because there are no more young children left. Jamie, we learn, is now an author, while Jackson is apparently working to solve the hybrid animal problem (or at least sending inappropriate gifts for a 10-year-old). Outside the school, Abe meets a young woman, who notes that hybrid attacks are getting worse — and there’s only one person who can help solve the problem.

No, he isn’t, grown Clementine reveals — “and I know just where to find him.”

See you next summer for Zoo Season 3!