Rob Lowe may have been the intended target of the latest Comedy Central roast, but as always, no participant left Monday’s ceremony unscathed — least of all Ann Coulter, who was there for some reason.

Saturday Night Live‘s Pete Davidson took the first swing, or rather the first three swings, at the conservative pundit: “Ann Coulter, if you’re here, who’s scaring the crows away from our crops? … Ann describes herself as a polemicist, but most people call her a c–t. … Last year, we had Martha Stewart, who sells sheets. This year, we have Ann Coulter, who cuts eye-holes in them.”

For a second, it seemed like Jewel was going to stand up for Coulter: “As a feminist, I can’t support everything that’s being said up here tonight … but as someone who hates Ann Coulter, I’m delighted.” (Oh, Jewel, what a gem.)

Jewel then handed the mic to British comedian Jimmy Carr, who delivered quite possibly the darkest zinger of the night: “Ann Coulter is one of the most hateful, repugnant, hatchet-faced bitches alive. But it’s not too late to change, Ann. You could kill yourself.”

(That said, Lowe himself provided the evening’s darkest runner-up, referring to Coulter as looking like a close-up abortion.)

But as Jeff Ross posed so eloquently, “How do you roast someone from hell?” Needless to say, Coulter was amused by all of this: 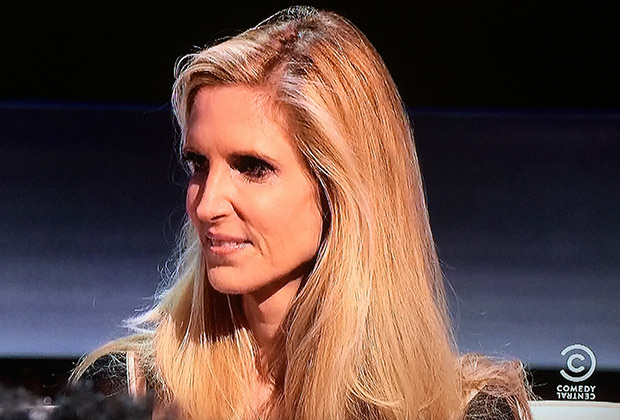 Now that you’ve indulged me in all things Coulter, here’s a rundown of the sickest burns directed at the man of the hour (which are mostly about his bad acting and multiple sex tapes):

* “Rob was in a movie called The Outsiders back in the day. His character was called Soda Pop because, at the time, Rob was 98 percent coke.” – David Spade

* “People call Rob Lowe a bad actor, but that’s only because they didn’t see him tell his wife he didn’t f–k that nanny.” – Davidson

* Jewel revealed that she asked to not kiss Lowe in an episode of the short-lived NBC drama The Lyon’s Den because she didn’t know where his mouth had been. She then treated the audience to a cute little ditty sung from the perspective of the 16-year-old girl in Lowe’s infamous sex tape. (Sample lyric: “Of all your films, I’m the best thing you’ve ever been in.”)

* “You’re an adonis! You look like you’re sculpted. … You put the statue in statutory rape.” – Nikki Glaser

* “Rob has been in some of the most successful movies of our lifetime. … I’m sorry, on Lifetime.” – Spade

Your thoughts on Lowe’s roast? Drop a comment with your personal M.V.P. of the evening below.