To paraphrase the immortal words of South Park, “Oh my God, Mistresses killed…”

Lydia? Karen? OK, maybe no one dies. But then again, it’s the penultimate episode of the season. We’ve got a mentally unstable ex-nanny who’s just taken a bottle full of pills and is teetering on the edge of a balcony. And we’ve got her wacky former employer suffering a calamitous collapse of her chic high-heeled shoe as she rushes to the young woman’s rescue.

As a betting man, I’d put money on at least one of ’em getting the Humpty Dumpty treatment during Tuesday night’s Season 4 finale.

But would the Mistresses writer’s room really repeat itself by having Karen accidentally send another innocent to the grave? I mean, Dr. Kim was part of the three-way struggle (not a euphemism) that resulted in her college-aged lover Sam Grey’s shooting death in the final episode of Season 1.

On the flip side, Mistresses without Karen would be like Bachelor in Paradise without the booze, or a Sloppy Joe without the tomato sauce: Bone dry, mess-free, and utterly impossible to fathom. 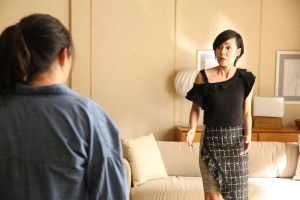 Karen is the font from which so much of Mistresses‘ crazy erupts. She’s the Old Faithful of bad decisions, jaw-dropping hookups, terrible advice, hooker wigs and “I really ought to delete this show from my series-recording list, but I definitely won’t” plot twists. (Maybe she falls and gets amnesia? Ooooh, I kinda like where that possibility could take us in a potential Season 5!)

Lydia, frankly, seems the likelier choice to take a dirt nap. She’s never donned a hooker wig, or participated in a thruple, or engaged in an sexually inappropriate patient-therapist or employer-employee* relationship. (*She did come close, though!) Which, in Mistresses terms, ranks her about least three notches below the scented candles at Maison Sur Mer in terms of overall relevancy.

While we hold our breath for the next 23 hours and wait for answers, let’s recap the action from Season 4, Episode 12, “Back to the Start.”

SHE NEVER SHOULD’VE FIRED JERRY O’CONNELL, AM I RIGHT? | Remember when Karen had the totally ripped manny who was more than happy to put in extra hours (wink wink) in service (nudge nudge) of his boss? OK, yeah, so dude judged Karen’s decision to stop breast feeding after six months, but it still beat the drama Lydia brought to her door. Karen spends the episode meeting new beau Adam’s parents (who adored her sexy memoir, bee tee dubs), exchanging her first “I love yous” with the guy and even leaving baby Vivian in his care.

But at the same time, she’s ignoring Lydia’s desperate texts, phone calls and drop-ins to apologize for those many weeks where she was using Karen’s pic/lifestory to create her online dating profile — and creepily pulling Adam into Karen’s orbit. After another warning about getting a restraining order, Karen reconsiders and thinks perhaps she’s been too harsh. She decides to drop in at Lydia’s home and finds her on the brink of suicide. “I’m gonna get you a glass of water,” says Karen, and just as I’m about to yell “H2O IS NOT GOING TO HELP IN THIS SITUATION!” I realize Karen has secretly dialed 911 and has positioned her phone to catch the whole back-and-forth. Lydia, it turns out, has struggled her entire life with her mental health, has been abandoned by her family, and considers herself a “college dropout with no future.” If it’s Karen who takes the plunge off her balcony, I fear Lydia’s self-worth will be shattered on the sidewalk, too. If it’s Lydia who dies, will it finally be time for Karen to exit the therapy business? Maybe all this can be fixed with a trip to the shoe-repair shop down the block? 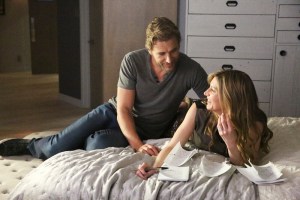 BEACHES (THE REMAKE) | I always like a bit of parallel structure, so color me tickled that Joss and Harry — who first succumbed to their passions on a beach (just before Joss’ aborted first wedding attempt) — tie the knot right where the surf meets the sand. The reunited couple kicks off the hour promising “no more secrets” — which doesn’t stop Joss from having an epiphany about her career and making plans to sell her growing P.R. company without so much as a single conversation with her fiancé. She wants to take the money from the deal to fund Harry’s beachfront bistro, but he’s been there and done that with Joss’s sister/his ex when he owned Savannah’s. (The man knows his history! And Joss sure likes to change professions… once per season, if I’m keeping track correctly!)

Joss gets a “mental massage” from Karen — the therapist’s advice is essentially for Joss to close her eyes, jump and hope that a net (or a truck filled with feathers) appears — and Joss’ reply legitimately makes me guffaw. “People actually pay you for this?” Karen’s retort — paying customers get better counsel — isn’t too shabby, either. But in the end, after Joss reminds Harry that his nest egg financed her business, and therefore he’s entitled to use some of the profits, they make an offer on the lot he abandoned back when shady Jonathan came a’callin. The guy who’s selling it happens to be a judge, and before you know it, he’s presiding over their nuptials, Harry’s slipping a shell onto Joss’ pinky finger and Joss is reciting some lovely impromptu vows about how during her entire PTSD/anxiety pills/vigilante meltdown, the “Only thing I was clear about is we are destined to be together.” Awww, I love a happy ending! (Here’s hoping that weapon Joss used to pistol-whip Lee last week doesn’t wind up in the hands of the police, and land her back in the clink, before Tuesday’s credits roll. Because that sure as hell would not meet my definition of “happy.” Or sit well as we wonder whether or not a Season 5 is gonna happen.) 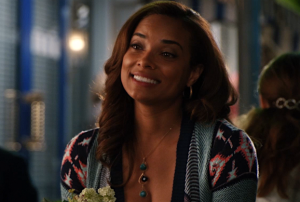 SHE’S MADE UP HER MIND, OHHHH, SHE’S KEEPIN’ HER BABY | OK, so April (naturally) tells Karen and Joss she’s pregnant before she spills the beans to Marc. “Is it Marc’s?” asks Joss. “Are you keeping it?” wonders Karen. (Both completely in character, yes?) But our gal may need to make an appointment with Maury Povich to help her spill the news to her baby daddy. After all, they’ve just split up so he can pursue his music dreams, and April falters when Marc’s restaurant gig scores him a college tour with a fledgling label. She doesn’t want him to choose her just because she’s carrying his child — she wants him to be a boy, standing in front of a girl he doesn’t know has his bun in the oven, asking her to love him. But ultimately, Marc’s an adult — and I wonder if this is another case of April controlling the scenario when she ought to be engaging him like a fully fledged partner? 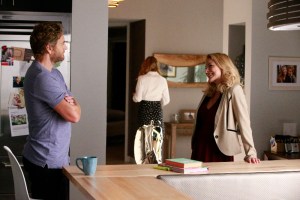 RANDY’S GOT A ROOMMATE! | Sorry for the misdirect, this paragraph is actually about (ugh) Kate. Yep, she’s back in L.A., after spending time at an ashram in Ojai (of course), sweating, vomiting and finding clarity. She sneers that she needd to get away from “drama and bad energy,” and Joss makes a hasty exit instead of leaving ligature marks around Harry’s sister’s neck. Kate’s new plan is to be the “best roommate ever” to the totally awesome Randy (might I once again suggest he get promoted to fourth mistress next year?) even though she doesn’t cook or clean or even make enough money to pay her fair share. That conversational thread gets interrupted when Scott’s wife busts into the store and confronts her about stealing her man. Kate isn’t bothered by the emotional carnage in the least, though. All she hears is that Scott admitted to the woman that he’s in love with someone else — and Kate assumes it’s her. Good thing April’s there to drop a much-needed, super-secret truth bomb. She spills the beans about Scott’s visit to Joss, his admission that he’s still in love with his ex-fiancée, and the ugly reality that he was just using Kate to fill a Joss-shaped hole in his heart. Methinks it’ll take a few more puke-ations at the ashram for Kate to recover from this gut-punch. Here’s hoping Randy’s not the one who has to clean it up. #TeamRandy

What did you think of the penultimate episode of Mistresses‘ Season 4 (or possible of all time)? Will/should Karen or Lydia die? And how are we feeling about Kate’s return? Hit the comments with your thoughts!