The man who helped make “salmon ladder” a household word is setting his sights on the salmon ladder.

Arrow star Stephen Amell reached out via Twitter to NBC’s American Ninja Warrior on Saturday, expressing his interest in competing on the endurance series next year.

Ninja Warrior host Matt Iseman tweeted back his “acceptance” of Amell’s application, then jokingly asked if the show could use the Arrowcave for the City Finals.

We accept. Can we borrow the Arrow Cave for the City Finals? https://t.co/4xwcO8RJC9

Despite the gents’ congenial exchange (and over a holiday weekend at that), Amell’s participation on American Ninja Warrior is far from officially confirmed, yet sure is fun to think about. Amell has made a personal goal come true before, by working himself into a WWE storyline (eventually competing in last year’s SummerSlam). Plus, if you’re familiar with the extreme workout videos that the actor shares on social media, you know he is no stranger to Ninja Warrior-like obstacle courses. 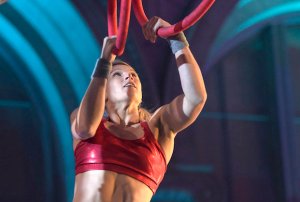 no stranger to TV’s DC Comics universe — Supergirl stunt woman Jessie Graff has competed multiple times on the NBC series, and just this past week became the first woman to complete Stage 1 of the American Ninja Warrior finals.

How do you think Amell would fare against an actual Ninja Warrior course? (And if he stumbles, will the hosts declare, “You have failed this City… Final”?)