THE PERFORMANCE | The relationship between Killjoys‘ Dutch and Khlyen has always been enigmatic. The Season 2 finale, however, filled in many blanks, setting the stage for an emotional two-hander between John-Kamen and recurring player Stewart.

As the frenemies infiltrated the Archive and scrambled to neutralize the green that had fueled tensions in the Quad, Khlyen detailed his complicity in the Sixes’ deadly scheme —”until I saw you. A face I never thought I’d never see again, in a place that never should have been.” In young Yalena, an inexplicable doppelgänger for his daughter Aneela, who’d been poisoned against the Quad, Khlyen found “my chance to make things right.” And for the first time ever, Stewart was able to reveal to us the truly human remainder of Khlyen’s assimilated self.

John-Kamen, meanwhile, made clear Dutch’s struggle to accept Khylen’s tale as true. “Bulls—t!” she bellowed, if half-heartedly. “Don’t pretend you loved me. That’s not fair!” And yet as the sequence played out and Khlyen made the ultimate sacrifice in the name of a greater good, Dutch ditched her disbelief and embraced the anguish of woman losing her father figure.

As Khylen explained his treachery as a way to protect his Yale, Dutch countered, “You never prepared me to be free! I’m not ready to let you go….” And yet it was time, as the two repeated the intro to many a childhood story he told her: When the nights were long and the days were deep, there lived a girl… and her father. 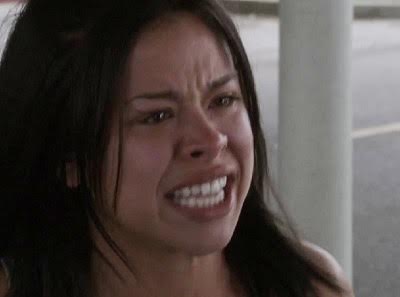 HONORABLE MENTION | In Monday’s finale of The Fosters, Mariana’s mix of pill-popping, stress and fear culminated in a terrific scene for her portrayer Cierra Ramirez. The actress channeled all of her passion and fury into Mariana’s emotionally heated confrontation with Nick, the ex-boyfriend who held her captive in her home and then almost killed himself in front of her. “You hurt me! You scared me!” she cried. “You made me afraid in my own bedroom.” In that final confession, Ramirez’ unexpected vulnerability amid all the yelling truly made our hearts ache for the troubled teen.

HONORABLE MENTION | Broadcast-TV tends to focus on noisier plot twists, so life’s quieter setbacks — like the loss of a job — seldom get airplay. But The Night Shift‘s Ken Leung brought just the right amount of gravitas to Topher’s unexpected termination at the hands of Paul’s father. Having earlier defended the hospital’s buyer (suggesting to Julian’s son, “I think he’s doing this to share something with you”), Topher learned that he would not be a part of the ER’s future. Coloring his voice with the resignation of a middle-aged man whose best apparently wasn’t good enough (or, the wrong kind of good), Leung made us feel Topher’s loss, even as he selflessly assured Paul, “Saving this hospital wasn’t about me, it was about helping people with nowhere else to go. We did that today.”