Syfy has renewed both of its summertime Friday dramas — Killjoys and Dark Matter — for third seasons.

The pick-up news comes on the eve of Killjoys airing its Season 2 finale (Friday at 9/8c), in which Dutch, Johnny, D’Avin and an old enemy join forces in a desperate bid to thwart Level Six’s plans for The Quad. (Watch an exclusive sneak peek.) 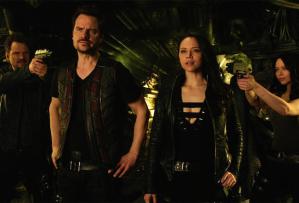 meanwhile, has left to air this Friday’s episode, titled “Take the Shot,” a double episode on Sept. 9 (starting at 10 pm) and then its own season finale on Sept. 16.

Killjoys this season has averaged 650,000 weekly viewers and a 0.2 rating, holding onto its demo number from Season 1. Dark Matter, averaging 700K and a 0.2, also has matched its freshman demo delivery.