With Mike’s future as a free man in limbo following the loss of his deal, “a lot is on the line” during tonight’s episode of Suits (USA Network 9/8c), star Gabriel Macht previews.

“Harvey is now trying every which way he can to get Mike out,” Macht describes. Meanwhile, the faux lawyer “reveals a few things to Kevin that put him in a really vulnerable situation. Gallo is also closing in on Mike. So we’re doing all we can to get to Sutter’s daughter. Mike comes up with a couple good ways of doing that via Donna, and Harvey is also working the other side, trying to dismantle Cahill’s case.”

At the end of the uphill battle, “there are some positive elements that come out of all of this,” Macht adds.

Macht — who also directed this week’s episodes — shared with TVLine his thoughts on Harvey’s Season 6 journey, unresolved issues (paging, Dr. Paula Agard!) and his (non-romantic?) feelings for Donna. Plus, watch an exclusive sneak peek of Jessica and Malone’s unexpected reunion, which causes the the boss lady to question some things in her life.

TVLINE | Do you see this experience with Mike as something that’s going to cause Harvey to make different choices in the future, should it ever be resolved? Will he be a different man going forward?
We always hope that characters can evolve and grow and mature properly and learn something about themselves so they can come out of a situation that’s potentially sticky and/or extremely uncomfortable…. Look, I would love for that to be the case with Harvey. I still think he’s got a lot of other demons in the closet that he’s dealing with. Maybe he’ll figure this one out, but he still has abandonment issues, control issues, type-A power issues. We’ll see, if and when he gets Mike out of jail, whether this really does turn a page in [Harvey’]s life.

TVLINE | Is that something you see him doing, resuming therapy?
I’m hoping so. I don’t know if it’s therapy or what, but I hope that we get back into some of his personal life, where it’s not just all about the firm. It’ll be interesting to see what the writers do. 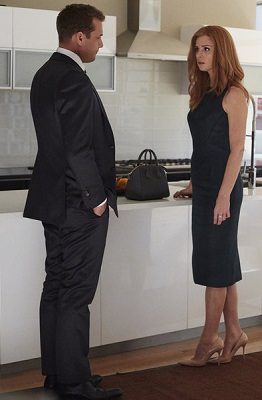 TVLINE | What’s your take on Harvey’s feelings for Donna?
Harvey has always seen her as, for my money, his right-hand woman. She has been his Moneypenny, the left brain to his right brain. He needs her. He can’t operate without her when it comes to his work. And when he makes his error of judgments, she is able to come in and speak sense to him. Whether or not they’re right for each other romantically, I don’t know if he knows. I know they had that one time, and I know if they did get back together, she wouldn’t work for him. I don’t know if they did get together, if he could do it without her. Maybe if he changed his line of business, became a judge…? Maybe then he could end up with her. I really don’t know.

I really like the idea that it’s almost there and it’s not there. But honestly, I don’t find that we really play those moments. Some of it’s in the writing, but we’re not playing those moments. So it’s really interesting to see how an audience can take whatever it is that we’re putting forth.

TVLINE | What was his intention then when he told her “I love you” a couple seasons ago?
You know I can’t live without you. I don’t know if that means I am romantically in love with you. I love you as my friend, my sister, my partner. 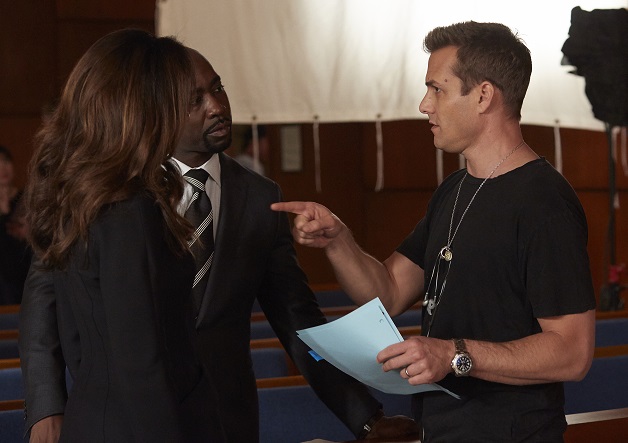 TVLINE | There are some nice, quieter scenes with Jessica in this week’s episode. What was it like directing those?
It was good. For me, Episode 8 tees up Episode 9 and 10. It’s sort of the beginning of the end. I liked seeing Jessica really considering what’s happening with this fellow on death row and her place in the firm and what’s important to her as this power-hungry attorney who owns the firm, as opposed to love. We reintroduce Malone (Lucifer‘s D.B. Woodside) to see what blossoms out of this and what doesn’t. There’s a lot at stake right now, and this is beginning of Jessica seriously questioning many different things in her life. It was really nice to see that it wasn’t this aggressive or controlling or strong, strong woman. I find her to have even more strength in her simple moments, just direct talking to her ex-boyfriend.

Press PLAY below to watch Jessica and her ex reunite in court.