With A.D.’s ever-expanding army on the warpath, Spencer’s going to be a little busy on Tuesday’s Pretty Little Liars finale (Freeform, 8/7c) — but not too busy for romance.

TVLine spoke with Nicholas Gonzalez, introduced to the fans — and Spencer — via a memorable elevator scene at the top of Season 7. And not only does it sound like Marco is the first decent law enforcer to hit the streets of Rosewood, but he might also be the viable Toby replacement Spencer’s been looking for:

TVLINE | How would you describe Marco’s feelings for Spencer?
Marco’s a good guy. From everything we’ve seen and I’ve been told about him, he’s really in town to solve some crimes. He’s a moral, upstanding guy. As for Spencer, he just sees a charming, beautiful, intelligent, witty woman. Despite all these signs against them, he wants a relationship with her. 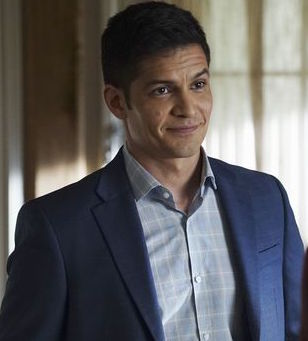 TVLINE | I’m sure you’re aware of Rosewood’s less-than-stellar history with police.
Yeah, exactly. My audition consisted of a chemistry read with Troian, which was so much fun. And when we stopped the scene, Marlene leaned forward and said, “Well, I guess we’re finally going to have a smart cop in Rosewood who’s finally going to solve some crimes for once.” Of course, the crimes keep piling up, so we’ll see if he can keep his head above water.

TVLINE | Hey, as long as he isn’t causing the crimes.
Right. He’s definitely not preying on the Liars, like the other cops. He’s genuinely attracted to Spencer and hopes the best for her.

TVLINE | It’s funny, we’re seeing this relationship building — but they’ve already hooked up. How soon into being on set did you film that elevator scene?
[Laughs] First day. It was like, “Hey, nice to see you again. I’ll be your lover for the day.” … But Troian is a consummate professional, and she made it so easy and comfortable for me. We had a lot of fun doing it.

TVLINE | Do you see Marco as more of a rebound guy, or does he have a shot at a future with Spencer?
With Spencer, if you’re going to make that argument, you’d have to ask, “Isn’t she always rebounding?” She’s always breaking up with somebody. … The potential in everything is there, but the question is: How much is Marco going to find out? That will determine the level of their relationship. I don’t know if he’s ready to compromise his own morals, career and life for it.

TVLINE | And what’s Marco’s role in the summer finale?
His role in the finale is just trying to control the s–t storm coming to Rosewood; you’ll see some faces you thought were gone. Marco’s trying to muddle through it without all the information, but he finds out some truth. There are some really intense moments coming.

Your thoughts on “Sparco”? Hopes for the big finale? Drop ’em in a comment below.