Not a whole lot happened in the Season 3 premiere of FX’s The Strain. Instead, the hour was designed to give us the current lay of the land, now 23 days into the infestation.

Ever since Kelly got the best of Nora and lured Zack away in the Season 2 finale, EPH has been spending his nights half-asleep and two-thirds drunk at their old home, hoping his son might resurface. (This slightly raises the eyebrows of the military, seeing as the area has been evacuated.) During the day, when not stealing prescription drugs to barter for soup and Premium Vodka, Eph is hammering away at the bioweapon — which, he is shocked to learn from councilwoman FERALDO, has only been demonstrating a 75 percent kill fate as of late. Are the strigoi “adapting”? Does the formula need to be revisited?

FET meanwhile has been working alongside the Navy SEALS, helping them scout out and raze “nests” throughout the city, hoping to get a bead on the “king rat.” Like others, Fet hopes that the military will bolster its presence, but that is not happening. Instead, he is informed that “New York has been written off,” with resources instead focused on more nascent outbreaks elsewhere. In two days, the SEALs are moving out — if there are any left, that is. Because in the course of chasing after EICHORST, Fet’s buddies are lured into a trap where they 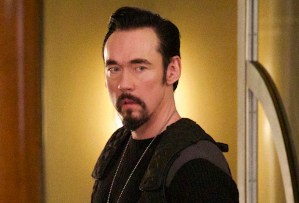 encounter THE MASTER, and their already puny ranks are brutally diminished.

SETRAKIAN has had his nose buried in the Occido Lumen, with QUINLAN helping translate the ancient text. Fet doesn’t take kindly to Quinlan’s involvement in their operation, but the professor does his best to explain the Born’s importance. When Quinlan asks to be alerted the instant the SEALs locate The Master, Fet laughs off the request, saying his well-equipped buddies have it covered. Quinlan, though, warns that many centurions have fallen over the ages, trying to defeat The Master.

We also see Quinlan meet with the remaining Ancients, who have some concern that vanquishing The Master will affect them as well. Quinlan has no answers to that yet, as the Lumen is still being decoded, but he assures them he is their “best hope.”

GUS has his turned mother chained up in the apartment, where he feeds her with his own drawn blood — though that seems to barely sate her appetite.

As the premiere draws to a close, we see that ZACK is doing well enough where he is being held, helping his mom with her hair and makeup. KELLY assures her son that The Master will let them stay together, because she is going to “do something for him.” And as Eph settles in for his latest stakeout of their Queens home, sure enough Kelly (and her creepy Feeler friends) shows up, to assure that Zack is A-OK and shall be returned to his father — in exchange for the Lumen.

Want scoop on The Strain, or for any other show? Email insideline@tvline.com and your question may be answered via Matt’s Inside Line.