The following contains spoilers from this Sunday’s episode of TNT’s The Last Ship.

The heroes of The Last Ship this week called in for backup, in the form of a very familiar face: John Pyper-Ferguson’s “Tex” Nolan, the onetime private security contractor who allied with the Nathan James crew during the first two seasons.

Tex and his daughter helped Kara infiltrate the seized White House and whisk President Oliver away to safety (R.I.P., Jacob Barnes). But in the aftermath, corrupt chief of staff Allison Shaw counterpunched by telling America that the “agitators” — as well CNO Chandler, whose crew had just vanquished Peng and his minions — were treasonous usurpers. As such, she has suspended the centralized government and turned control over to the regional leaders… while, we see, Armed Forces generals are one by one murdered.

TVLine spoke with Pyper-Ferguson about re-boarding The Last Ship, how the heroes might escape the “hole” they’re now in and more.

TVLINE | You’re a hard actor to pin down. A few episodes of Burn Notice, two seasons of The Last Ship wrapped around an arc on Suits…. Is that just the nature of the roles that come your way?
I’m sure its a combination of a lot of things. I love variety, and I love being involved. And in the “new” media, in the new television era, you really get to be featured when you’re in for just a season or two. Because then you really get utilized. On a lot of shows with people who stick around a long time, you’re kinda like, “Wow, we never see much of them….”

TVLINE | Because they “take turns” with the cast.
Yeah, So, that’s awesome when that kind of stuff comes up, like Burn Notice, like Suits and Last Ship. I’m just like, “I’m in. This looks great.”

TVLINE | So when Season 2 ended, did you know that Tex would be MIA for a bit, simply because it was storyline-dictated?
I absolutely knew that. As you know with The Last Ship, the whole thing is about being on the Nathan James, it’s about Navy men and women in service, and they authentically want to portray that. And Tex isn’t that. He’s a bit of a misfit in that group, and there’s not a lot he can do on the ship, which we really discovered in the second season, because there are people already assigned to all those duties. I had a two-year deal [with the show], so I knew at the end of the second year that something was going to happen, that I would be disappearing and ideally reappearing, being featured when I showed up again.

TVLINE | And almost in a Han Solo kind of way. The team’s up against the wall, they need a hired hand and boom! There’s Tex, guns a-blazing.
Why not! That’s a pretty good guy to be following. You show up, out of nowhere. 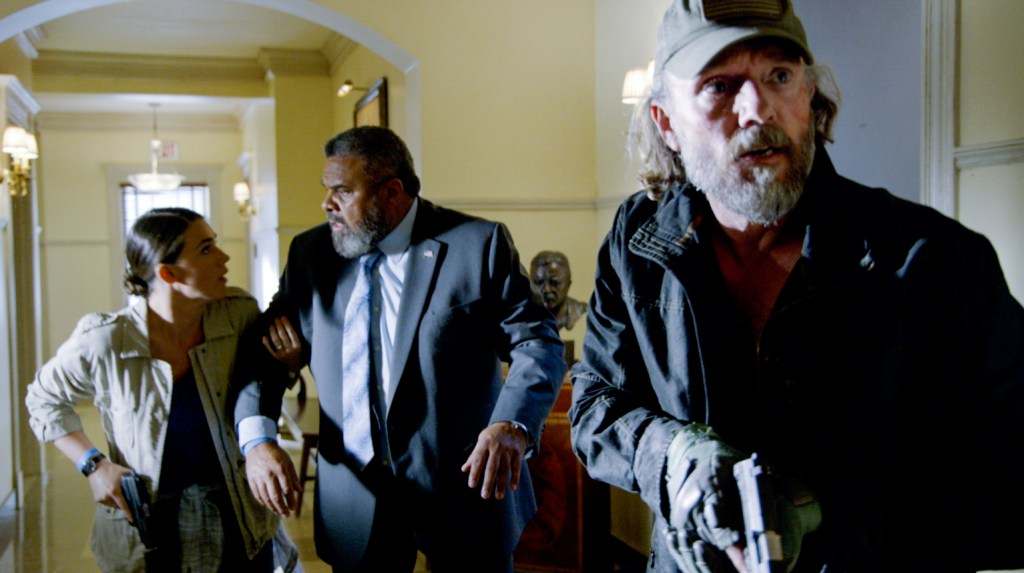 TVLINE | That said, despite Tex’s considerable contributions to the cause, everything sort of cratered for the heroes this week. What is the mission moving forward, for Tex, Kara et al?
Well, we’ve got that really important “package”— we’ve got to take care of the president [Oliver]. He’s the main focus for Kara and Tex at the moment.

TVLINE | It’s like the most important Secret Service detail ever.
[Laughs] It certainly is! I really wanted Tex to give him a nickname, but we never came up with one that we felt could stick, in terms of the Secret Service thing.

TVLINE | The heroes’ situation almost seems irreversible. They’ve been painted as this treasonous cabal.
I can’t help you with what happens next, but… the Nathan James, the people on the side of good or right, we’re in a big hole. It’s going to take some brains and a lot of brawn to get out of this situation.

TVLINE | I love that Tex’s daughter [Kathleen, played by Jade Chynoweth] is scrappy. The way she was laying down cover fire….
Isn’t she awesome?? She’s taken after her old man, so we love that. Also, as an actress, she’s fantastic. And you should check her out on Twitter, because that girl can dance her ass off. She’s an amazing dancer.

TVLINE | No opportunity to feature that in on The Last Ship, though. Unless there’s an Endor-like celebration at the end of the series.
[Laughs] Or in bloopers, maybe you’ll see her busting a move. 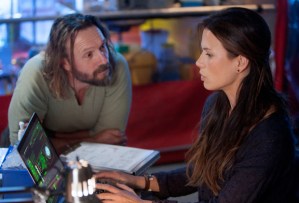 Dr. Rachel Scott (played by Rhona Mitra) has left us. Were you disappointed to not have the opportunity to further explore what was brewing between her and Tex?
Yeah, it’s definitley an unresolved relationship, but it’s kinda like life, isn’t it? I thought that [showrunner] Steve Kane and the writers really handled that well. There was a bit of foreshadowing in the last couple episodes of the second season, when you think Tex is talking about her and Chandler, but he’s actually talking about all of them — about how it’s the things that you didn’t say, and that’s really true. We all lose people, and the regrets you have generally aren’t about the things you did, but what you didn’t do.

TVLINE | So, she isn’t secretly alive and Tex is hiding her away in some barnyard bunker?
I think Steve Kane has been absolutely forthcoming about that and said no, she’s gone. So, as far as I know and Tex knows, it’s a done deal.

TVLINE | Before we go, give me one last tease about these last couple of episodes. Are you at liberty to say if Tex will reunite with the Nathan James crew?
You know, it’s absolutely inevitable. They have to come together in some way, we hope — whether that’s through absolute destruction or a little bit of luck and circumstance.