When last we tuned into ABC’s Once Upon a Time, Mr. Hyde — through a deal with Rumplestiltskin — had laid claim to Storybrooke, so that those from the Land of Untold Stories could relocate to the Maine burg.

But what exactly is an Untold Story, other than one that didn’t merit inclusion in the first volume of Henry’s storybook? 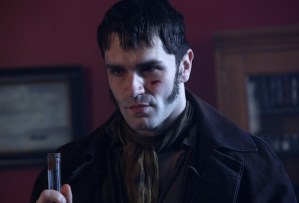 “It is a story that has yet to play out,” Once co-creator Eddy Kitsis told TVLine as part of our Fall Preview Q&A. “You’re going to see that a lot of people went to the Land of Untold Stories because they wanted to literally push ‘pause,’ like they were watching their own life on TiVo.”

So whereas Season 1 explored what happened after the fairytales people know and love came to a close, “This is a tweak on that idea,” says co-creator Adam Horowitz. “What happens to some of these stories if they don’t quite finish the way we thought they did, and were suspended midstream? And what would make characters want to suspend their stories?”

For some, Kitsis says, the reasons include “fear, not wanting to face something.” Yet now that Hyde has deposited them in Storybrooke, that “pause” button is poised to come undone — whether they like it or not.

In the latter scenario, “What you’ll be seeing is our characters wanting to help,” says Kitsis. “And we see Emma back in the position where she’s a Savior trying to to help people find their happiness” — 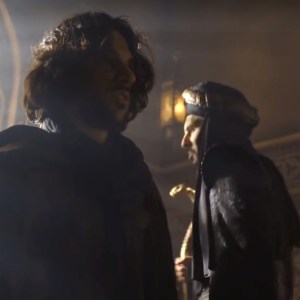 while she also processes the realization that there have been other Saviors, Agrabah street rat Aladdin included, before her.

All told, Kitsis promises a back-to-basics return to the Storybrooke-based tone of Season 1. “It’s really Emma and the Yellow Bug, riding around helping people,” he previews, “which is what we wanted to come back to this year.”

Once Upon a Time Season 6 premiers Sunday, Sept. 25 at 8/7, where it will lead into Season 2 of Secrets and Lies.