In this week’s Fear the Walking Dead, Nick learned that there were still people in the world that were crazier than him; Madison, Strand, Alicia and Ofelia checked into Mexican Horror Story: Hotel; and we all got to tag along on a trip to a post-apocalyptic Costco. Oh, and by the end of “Los Muertos,” only one of those characters wasn’t in imminent danger. Who got off easy (for now)? Read on!

RUDE AWAKENING | As the episode began, Nick happened upon a little girl crying as she watched her father voluntarily leave the fenced-in Tijuana compound through a bus in order to be devoured by walkers. “From death we come,” chanted the crowd en español, “and to death we deliver ourselves.” (Mmkay.) Later, Maddie’s son was recruited by Luciana to accompany her on a grocery run “’cause nobody’s gonna miss you,” she noted. What about her? “The only one who’s gonna miss me is already missing.”

On the road, Luciana explained that the gory ritual Nick had witnessed that morning was commonplace. “Those near death,” she said, “deliver themselves to the dead.” It’s all part of the earth washing itself clean and becoming new, she added. When Nick guessed that that was Alejandro talking, not her, she argued that the pharmacist was right to have faith. After all, he’d been bitten — she’d seen the wound firsthand! — and lived to tell. 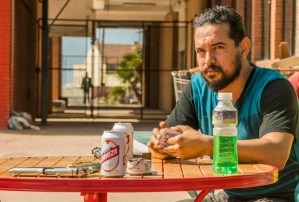 SHOP TILL YOU’RE POPPED | In East Tijuana, Luciana traded Oxy with drug dealers — well, now everything dealers! — for a shopping spree in their well-stocked store. Though she was unhappy to find out that she and Nick could take only one cart full of supplies rather than the usual two, the exchange went reasonably well — until her companion was busted for stealing a Ding Dong!

For a minute, it looked like Nick was gonna get his hand macheted off. But, having spotted the gang’s leader tending to his sick sister, the recovering junkie threatened to cut off their painkiller supply if he wasn’t freed — and if they weren’t given an extra cart full of supplies, too! The gamble paid off. However, it also made the gang curious about the location of Luciana’s compound. 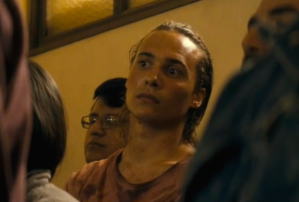 CHURCH OF THE POISONED MINDS | Back at la colonia, Nick gave the cake for which he’d almost lost a hand to the little girl whose father had been the walkers’ breakfast — in the process, melting Luciana’s cold exterior a little. Alejandro, on the other hand, didn’t see any need to comfort the kid — or anyone ever, for that matter. They needed faith, not comfort!

After the pharmacist pitched Nick on the idea that the true believers would outlast death — and inadvertently flashed his huge bite mark! — he warned that if the newcomer put his people in danger again, he’d “feed [him] to the wall.” Next thing we knew, Nick was nervously chanting along with his new community as Alejandro christened them “the chosen ones” and “the children of the resurrection.”

CHECKING IN | Meanwhile, Strand and Alicia finally convinced Madison to give up searching for Nick and head for the Abigail. Unfortunately, the yacht wasn’t where they’d left it — it had been swiped by the military, Victor guessed. What to do? “We walk into the sea,” suggested the newly orphaned Ofelia. Or, chimed in Alicia, we could check out that hotel up the beach. That clearly being the better idea, that was what they did.

Of note: The place was locked up when the group arrived. No one living or undead came out when Strand rang the bell. (“Service is subpar,” he drolly remarked.) And someone had used “Do Not Disturb” signs to mark the doors of the rooms that had walkers in them. Curious. 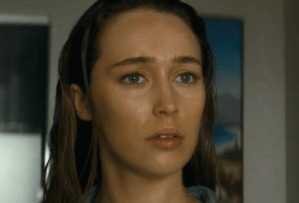 LAST CALL | While Alicia and Ofelia searched the rooms for minibar leftovers — with the latter, along the way, revealing just how hopeless she was really feeling — Strand poured Madison a “medicinal” martini to take her mind off Nick. A coupla rounds later, and he was admitting that, if they’d met at another place and time, he’d surely have hit on her, and she was working out her frustrations on the barware.

Upstairs, Alicia misplaced Ofelia just as someone was seen falling from a floor above them — a moment so unexpected, I actually jumped. Was it Ofelia? Was she more than depressed, suicidal? No, it turned out the walkers were escaping from their rooms and falling off their balconies! While Alicia tried to find Ofelia — and found only a stairwell full of walkers! — Strand and Madison were being surrounded by walkers drawn to all the noise she’d been making!

What did you think of the episode? Was I the only one who jumped when the first walker fell past the window? Do you think we’re about to get one of the “huge deaths” the cast teased at Comic-Con? Hit the comments!