FX’s Atlanta is most distinct for what it isn’t, than what it is.

It’s a half-hour in format, but it’d be misleading to deem it a comedy. And though it revolves around a young man shepherding his cousin’s music career, this is a world away from Empire. Nor is Al “Paper Boi” Miles a rapper on the verge of superstardom.

Lastly, it stars (and was created by) Donald Glover, but whereas the Community grad’s previous TV persona was wide-eyed and easily awed, here his “Earn” Marks seems to have seen, if not it all, a lot, and as such approaches his new venture with not so much giddy enthusiasm as a tenuous grasp on hope — that with any degree of success, he can better provide for his young daughter.

All told, Atlanta (premiering Tuesday, Sept. 6 at 10/9c) is a sometimes-quiet, contemplative series, never manufacturing spectacle or over-the-top drama in order to propel its narrative. An intense drug deal plays out with character-based nuance, more about the personalities in the room than the chance that guns will start blazing, while an episode set largely in the holding room of a jail finds drama in the assorted, transfixing plights of one-off characters.

Glover’s character — a relatively good man, if bad son — ironically doesn’t earn, at least not much, and as such sees in his cousin 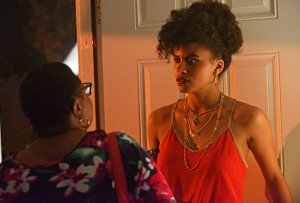 the chance to do right by his baby mama Van (Zazie Beetz, right), with whom he still shares a warm-ish relationship. As Al/Paper Boi, Brian Tyree Henry (Boardwalk Empire) gets some interesting notes to play, especially in a sequence where he comments on the deal-or-rap destiny of many a young urban black. Professionally, it’s not that Al lacks ambition; he just struggles with the profile “bump” one gets from being involved in a shooting or during a Twitter tussle with a sassy blogger.

Keith Stanfield (Straight Outta Compton) is interesting as Al’s best friend Darius, who is obviously “off” in a way that he is prone to random ramblings, such as when he schools Earn on how blacks don’t know who Steve McQueen was. Through the first four episodes, Darius is oftentimes just “there” in scenes, offering — along with Glover’s well-timed cock of an eyebrow — the series’ faint semblance of comic relief.

Never going for jokes or observational humor even to the degree of, say, Louie, Atlanta — like Louis C.K.’s self-authored FX series — instead offers a window into a very specific world and the small yet still important conflicts within. Early episodes don’t dive deep into the rap music business but hint at the specific hurdles it throws in front of its many wannabes. And in doing so, it draws you into the difficult world that Earn, Al and Darius inhabit.

THE TVLINE BOTTOM LINE: Atlanta‘s rhythm is one you’ll want to sample.