Every once in a while, a season-ending finale is literally hot stuff. Such is the case with NBC’s The Night Shift, which this Wednesday at 10/9c kicks off a two-part finale in which Jordan and Scott embark in a rescue mission that leads them into a rapidly spreading wildfire.

TVLine invited Jill Flint, who plays Jordan, to survey the hospital drama’s vial signs, offer Jordan some much-needed advice and preview the cliffhanger that just might leave everyone at San Antonio Memorial burned.

TVLINE | You’ve “done a show or two.” Why do you think this quiet little hospital drama from summer 2014 has had the legs it’s had?
Honestly, I think it’s because of how we take relationship all of us have behind the camera and put it in front of the camera. I think people respond to that. We interact a lot with our Twitter and Facebook fans, and they like to be a part of it. It keeps people going. Also, it’s a fun show, a fun show to watch. One minute you’re crying, the next you’re laughing…. It keeps people coming back, which we’re grateful for.

TVLINE | Also, I’m of the opinion that every generation deserves its ER, and this has a similar mix of race-against-time urgent care and interpersonal dynamics.
I loved ER. All of us — the actors, the writers — at one point watched ER, and that comparison is huge. We would never compare ourselves to that show, but we definitely were inspired. The other show is M*A*S*H. I was too young to get the jokes watching M*A*S*H, but when [the producers] talked about wanting to put the relationships and humor that M*A*S*H had into this show, I went back and started watching old episodes and I was dying. That show was so funny. 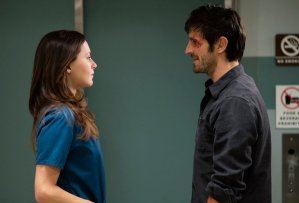 That poor woman, she’s been in one relationship, the big relationship of her life, for 10 years. I imagine Jordan as the girl who in high school was super-nerdy, and when she got to college she was the studious one, and then she met the Bad Boy (TC, played by Eoin Macken] and fell in love. She’s finally broken free from that, so I would advise her to “get to know yourself,” be single for a little while, see what that has to offer.

TVLINE | What are we to make of last week’s kiss between Jordan and Scott (played by Scott Wolf)?
Don’t make too much of it yet. Don’t make too much of it yet. Wait to see how this plays out. There have been a lot of things left unsaid between the two of them, they had a lot of unfinished business. She got back together with TC in Season 2, and as I’ve always said, those two together is like putting gasoline on a fire. This year I feel like she’s seeing Scott for who he is as a man and as a person for the first time — or should I say again, for the first time. They both have a lot of things that they need to figure out. But… there’s a crack in the door. We’ll see what happens, if they actually open it.

TVLINE | After all, the two of you right now have a wildfire to brave, apparently.
Of course! Unfinished business, forest fires, near-death experiences….

TVLINE | Of course TV likes to make fire scenes look as realistic as possible, but we also don’t want to flambe the cast. How intense did it get shooting this?
It’s funny, we had a lot of “open flame” around us, but we have a really great stunt coordinator, Al Goto, who basically makes sure that we’re safe at all times. But the biggest struggle that we dealt with is that we are in 100-degree [Albuquerque] heat, in the desert with very little shade, we’re all wearing turnout gear and jackets…. Forget about the open flame, man — the sun! I figured out this clever way to keep myself cool: I tighten the jacket sleeves around my wrist, and then I stuff ice packets down the sleeves. That’s pretty much what kept me going.

TVLINE | That is actually the opposite of the tips that the Once Upon a Time cast has shared with me for staying warm, on set in Vancouver.
Oh, I have those, too. Because on the set of Royal Pains there would be days where I’d be out on the beach in March in a tank top and shorts, in 40 degrees, I could see my breath… Insane. I would rather be hot than cold, I’ll tell you that much!

TVLINE | What all will be asked of Jordan and Scott out there amidst the flames?
Well, we have a poor woman who has injured her leg badly, so they have to work on it in the field — otherwise she’s going to lose it. We then need to drag this “dead weight” through a forest fire for miles and miles, and every time they turn around they’re being cut off by a fire and trapped…. 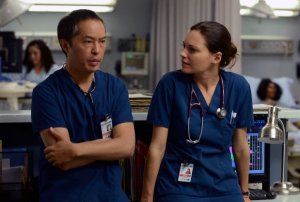 at the hospital, there’s a new owner…?
Yeah, that story will be unfolding. We’ll see what happens with that. We’re not going to get rid of Topher (played by Ken Leung) without a fight.

TVLINE | I was going to ask, how worried should we be for Topher?
You should be worried about all of us. The way they leave it is cliffhanger-y for each and every single character. You have no idea what’s going to happen next.

TVLINE | Lastly, what storyline this season, outside of your own, have you most enjoyed?
Watching Topher and his mother, that storyline — there’s so much heart to it but there’s humor as well. It also opens up Topher’s character so you see how he grew up and how he became who he is…. I’m also really loving the storyline between Drew (Brendan Fehr) and Brianna (Kyla Kenedy), seeing him trying to adopt this girl. Watching this family manifest itself has been great, and the chemistry has been fantastic. There have been a lot of other moments, like seeing Paul (Robert Bailey Jr.) evolve from uptight to sweet and endearing. Seeing Shannon (Tanaya Beatty) start off as tough as nails, unsure where she’s coming from, and then you realize what she has gone through and what she has had to overcome, is fantastic. What they’ve done with the characters this year has been very fun to watch.

Want more scoop on The Night Shift, or for any other show? Email insideline@tvline.com and your question may be answered via Matt’s Inside Line.