This week on USA Network’s Mr. Robot, one could only imagine the fallout of the Elliot/prison reveal, while Darlene & Co. felt the FBI (among others!) close in on their little operation.

With neither Elliot nor Mr. Robot to be seen this week, all eyes were on the ladies: Darlene, Dom and Angela. The latter went to drown her latest sorrows at a Fourth of July karaoke night, where she blew off the guy (aka an FBI plant!) she hooked up with a few weeks back, got into (and handily won) a verbal sparring match with a friend of her dad’s, crooned “Everybody Wants to Rule the World” and then flirted some with some older guy.

Darlene, meanwhile, had considerably bigger fish to fry — namely, E Corp legal eagle Susan Jacobs, who finally returned to her smart home to find fsociety’s core four celebrating their dissemination of a new video that excerpted the (daming) FBI conference call they hacked. The team’s first fix was to zip-tie Jacobs to her indoor pool railing, at least until they decided their next play. But when Trenton freed Jacobs to tend to bodily functions, “Madam Executioner” tripped and smacked her head against a wall something bad. She wasn’t dead, but Darlene saw an opportunity to use their prisoner’s down time to “own her” by digging up digital dirt.

That took some doing, but Darlene eventually confronted an awoken Jacobs with evidence of her getting unethically “close” with judges. The power women bonded some over a cigarette — when Darlene wasn’t taunting Jacobs with a memory of how years ago the rising E Corp star first effed with her family. Darlene then clipped Jacob’s restraints… only to taze her, sending the woman tumbling unconscious into her pool. Upstairs, Darlene presents the team with a tale of “self-defense,” while Mobley notes that Jacobs had a well-documented heart condition (that Darlene obviously knew about). Mobley and Trenton 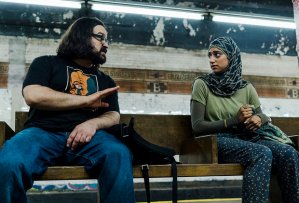 (whose “meet cute” origin story was saw at the top of the hour) promptly scram, to prepare to flee town and check on family, respectively. That leaves Darlene and Cisco to dispose with Jacob’s body, lest any fsociety groupies return to the burned safe house and find her.

Once home, Mobley gets picked up by Dom and the FBI — but not as a suspected super-hacker, but merely the DJ at the “End of the World” party. Dom makes clear, “We want Tyrell Wellick, not his DJ,” but Mobley asks for a lawyer, and soon enough is released given the privacy scandal the feds are already dealing with. Afterward, Mobley texts Trenton for a covert rendezvous, only to leave her hanging for two hours (…and counting).

Darlene meanwhile crashed at Cisco’s after they cremated Jacobs using the same pet-cremation oven where they roasted their hard drives. Upon waking, and with him in the shower, she logged onto his laptop and saw that he had been communicating with his Dark Army pals, documenting the fact that she was in his custody. When Cisco emerged from the show, he saw his laptop smashed on the floor — and a baseball bat barreling toward his head.

What did you think of the episode “Successor”?