All sambas have to end sometime, and on Sunday, the 2016 Summer Olympics came to a close at Maracana Stadium in Rio de Janeiro, Brazil.

Much like the games’ opening pageant, the closing ceremony played up the host nation’s culture and customs, featuring traditional Brazilian song and dance, as well as a moving flag-raising ritual and one heckuva fireworks display.

Halfway through the event, an edited version of which aired on NBC Sunday evening, Tokyo governor Yuriko Koike accepted the Olympic flag, marking the official transition of the games to the Japanese city for 2020.

A few highlights from the ceremony:

* Gold-medal gymnast Simone Biles led the United States into the stadium during the Parade of Flags — and, naturally, was asked to pose for a picture with just about every athlete who entered the venue. 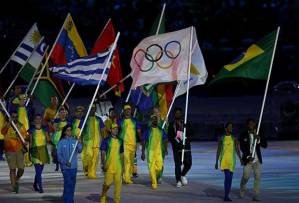 * Tongan athlete Pita Taufatofua made another shirtless, greased-up appearance, for which the world is very grateful.

* As Rio passed its Summer Olympic duties over to Tokyo, performers from the Japanese capital offered a taste of what we can expect in the 2020 opening ceremonies — and boy, was it cool. My personal favorite moment? Prime Minister Shinzo Abe emerging from a giant Super Mario-inspired green pipe, dressed as the video-game plumber himself.

* After the games were officially closed by IOC President Thomas Bach, Brazilian musician Mariene de Castro took center stage — and, unperturbed by the rain falling around her, sang until the Olympic cauldron behind her had been completely extinguished.

* Last on the agenda: dance party! Inspired by Brazil’s annual Carnival festival, the remainder of the closing ceremonies was a blur of colorful costumes, enthusiastic musicians and — of course — a marathon samba.

What were your favorite moments from the closing ceremonies, and the Rio games overall? Hit the comments and tell us!