Steve McGarrett is back up and at ’em as CBS’ Hawaii Five-0 opens Season 7. But maybe the liver transplant recipient should dial things down juuuust a notch?

In the exclusive first look above, McGarrett (played by Alex O’Loughlin) is going full tilt during a foot chase when things apparently take a turn for the worse — as evidenced by the second photo, below. The setback surely will serve as fodder for Danny (Scott Caan), who no later than their second scene of the season is reminding his partner about the liver he donated. 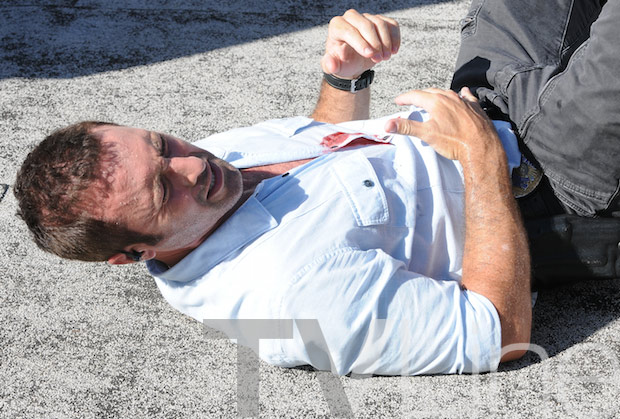 “There is an arc with Danny trying to get McGarrett to slow down a bit and appreciate the fact that he’s been given a second chance — or fifth chance, maybe sixth, based on all the stuff he’s gone through in the series,” says showrunner Peter M. Lenkov.

With a serial killer-targeting vigilante on the loose, McGarrett is loathe to let up, and yet “he does start to start question his mortality and the choices he’s made,” Lenkov says. “What he’s gone through has definitely had an effect on him.”

Want more scoop on H50, or for any other fall show? Email insideline@tvline.com and your question may be answered via Matt’s Inside Line.