This week on TNT’s The Last Ship, both the Nathan James and the White House were targeted by traitors. Who was behind the double-cross, and why?

Racing against time to track down Peng’s arsenal of anti-cure payloads, the Nathan James was led to the island of Paraiso, a long-abandoned military base. There, they were met by… a jaunty fellow in tennis whites. The local insisted that all was idyllic on the isle, that Peng leaves them be, while their meager sewing factory manufactures jeans and what not. But nothing smells quite right in “Paradise,” as Danny learns when a little girl alerts them to a second factory on the island.

There, Chandler, Danny, Wolf and Sasha are met by soldiers and gunfire — which they (remarkably) manage to suppress. Afterward, they find inside the hidden factory what remains of Peng’s anti-cure assembly line, and a clue pointing to Korea as the next target.

Operating off a best guess from Takehaya, the James arranges to meet up with the Shackleton and Hayward, to triangulate and intercept the Chinese war ship carrying the anti-cure. Little do they know, someone inside the White House has been sneaking their coordinates to the enemy all season long, which Kara slowly realizes after she and her friend crack the code. Alas, Kara is a second too late to alert the James and abort their mission, and all three destroyers are fired upon from a land battery. The Shackleton is sunk and the Hayward is majorly damaged, with a total of 83 dead. 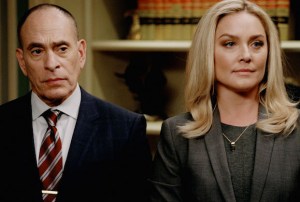 White House in St. Louis, Kara comes to suspect that weasely Rivera is behind the treasonous transmissions. But as she follows him to a meet-up, chief of staff Allison Shaw confronts President Oliver and orders him to “sit down.” When POTUS goes to have the usurper ejected, he is assured that all lines to the outside have been cut, and that the chief of staff’s security detail has been “repurposed” to guard Oliver. Shaw is not acting alone in this coup, but with the backing of all the regional leaders, who have decided that a centralized power is not what a hurting America needs right now.

Meanwhile in the parking garage, Kara from the shadows witnesses Rivera and a senator being assassinated by goons. As the police begin marshaling the streets, she slowly slips away….

What did you think of the episode “Paradise” and the lonnnng-awaited mole reveal? And did Shaw apply bronzer just before the betrayal?