Katie Ledecky of Team USA made Summer Olympics history on Friday, becoming the first woman since Debbie Meyer of the 1968 Mexico Games to secure the gold medal in the 200-, 400- and 800-meter freestyle finals.

The swimmer’s stamina throughout the 800-meter event was simply astonishing. Not only did she break her own record (again!) by completing the race with a time of 8:04.79, but she finished her swim nearly 12 seconds before second-place finisher Jazz Carlin of Great Britain. Her time in Rio comes to an end with four gold medals, one silver and immeasurable anticipation for her next go-round in the Olympic games.

Further supporting Beyoncé’s hypothesis that it’s indeed girls who run the world, Maya DiRado of Team USA also clinched gold in the 200-meter backstroke final. Her victory — the last before her retirement — was considered unlikely against Hungary’s “Iron Lady” Katinka Hosszu, who ultimately came in second. As for the guys? In what can only be described as a major upset, Joseph Schooling of Singapore beat Michael Phelps in the 100-meter butterfly final. Instead of garnering his 23rd gold medal, Phelps nabbed the silver in a three-way tie with South Africa’s Chad Le Clos and Hungary’s Laszlo Cseh.

Here are some other buzzed-about moments from Day 7 of the Rio games: 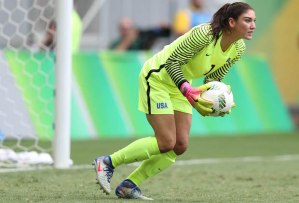 * OK, let’s just get our least favorite moment out of the way: The U.S. women’s soccer team, led by Hope Solo, Carli Lloyd and Alex Morgan, was eliminated in a quarterfinal game versus Sweden after a stunning shootout loss.

* The U.S. women’s basketball team continued their 45-game (!) winning streak versus Canada, beating our neighbors to the North 81-51. Meanwhile, the men’s team barely defeated Serbia with a final score of 94-91.

* In women’s beach volleyball, the United States’ Kerri Walsh Jennings and April Ross advanced to the quarterfinals, blanking Italy 2-0 in just outside of 30 minutes.

What was your favorite moment of this day of Olympic competition? What are you most looking forward to in the games? Let us know in the comments!