With memories of her mother’s previous romantic tragedies dancing in her head, Maya spent most of the (very special) episode trying to stop the wedding. To sum up her concerns in one quote: “What if my mother has some sort of nut gene that, in combination with any man at all, makes him go from ‘I do’ to ‘What’d I do?'”

(In Maya’s defense, I also have a few concerns about Katy and Shawn’s arrangement, the least of which being where they’re going to live. Is Shawn going to move to the city? Is Katy going to move upstate with Maya? Somehow I don’t see either of those things happening. — at least not smoothly.) 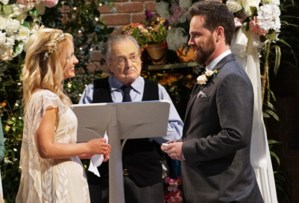 But marry they did, following a heart-to-heart between Shawn and Maya in which the phrase “This wedding ain’t about you” was tossed around. (Ouch?) And it was a beautiful ceremony, complete with a woodwind soundtrack, surprisingly eloquent vows and a special visit from none other than Mr. Feeny!

Speaking of Feeny, Auggie’s “I think he’s my grandfather” line might have been my favorite moment in Girl Meets World history. If Disney Channel foolishly decides not to renew the show for a fourth season, at least we had that.

Your take on GMW‘s big wedding episode? Did you even notice that the guys — Lucas, Farkle, etc. — were missing? Drop a comment with all of your thoughts below.