What the heil is happening on Supernatural? What old feud is Lucifer digging up? How is Arrow channeling Game of Thrones? “Lost” Person of Interest dialogue found? Read on for answers to those questions plus teases from other shows.

Please, please, please, anything you can tell me about my fave show, Supernatural? —Lisa
Oh, this is a bit more than “anything.” “We’ve got something really cool coming up in Episode 5, where it will be the triumphant or not so triumphant return of the Thule, who have decided to enact their master plan and bring back Hitler,” showrunner Andrew Dabb tells us. “And the way we describe our Hitler is ‘a psychotic Richard Simmons,’ so a little different than the standard portrayal. Sam and Dean are going to fight Hitler, and that’s opening up some interesting doors for us in terms of just doing some more crazy stuff.”

I was wondering if Lucifer Season 2 might include more backstory for the characters, Maze in particular. —Lucifer Morningstar
I hand-delivered your Q, as I do, to show boss Joe Henderson, and he said, “You will have hints of the Maze backstory, but Season 2 is more about moving Maze forward and having her figure out how to assimilate on Earth if she can.” That said, “What we will dig into very much is her relationship with [the fellas’] Mom (played by Tricia Helfer), back when Mom was in Hell and Maze was the chief enforcer. A lot of fun will be had with Mom being back on Earth and Maze maybe wanting to finish what she started.”

Arrow‘s Stephen Amell mentioned filming the most brutal fight scene in network television history, and that it would be a one-shot. Any more specifics? —Shannon
“I can say it looks amazing,” showrunner Wendy Mericle reports. “We’re now part of this [TV] universe where you have Game of Thrones and the way that they deal with violence and how they do their fights, so it’s our attempt to do something similar. It’s bloody. You’re in it. We’re doing a lot more ‘first person’ – not necessarily point of view – action. Stephen has been a huge proponent of doing that, and it’s going to feel real and in your face.”

Any scoop about Felicity on Arrow? —Sara
Coming out of the events of the Season 4 finale, “She’s in a very similar place to Dig. She’s really grappling with what happened in Havenrock, consumed with that guilt,” says Wendy Mericle. “She’s broken up with Oliver. She’s lost her company. And the one thing she has in this life in the bunker. So she’s doubled down on doing that. Until she gets past what happened in Havenrock, she’s going to stay in that state of limbo.”

Do you know if Jenna Dewan is returning to Supergirl for Season 2? — Jason
As of Thursday, when I spoke to show boss Andrew Kreisberg, “There’s nothing definitive” planned at this time. “But we love Jenna, and Lucy is obviously alive in our universe.”

Will Tyrant’s Molly come back from rehab? —Pat
Justifying her character’s retreat, Jennifer Finnigan says, “She has gone to take care of herself and find the will to live again. All she wants is to breathe again after this unfathomable, enormous loss. Once she can do that, she can be a good mother to her son.” And make no mistake, “She’ll be back,” the actress confirms. “But she’ll never be the same. She’s coming back with one very clear goal. And it’s a dangerous one — revenge.”

In your interview with Jonah Nolan and Greg Plageman about the Person of Interest series finale, they said that there was dialogue between Root and Shaw in the final scene on the phone — but it was removed. Did they share with you what that dialogue was? —Sunny
The boys did not tell me, no. So it’s a good thing I chatted up Sarah Shahi at Showtime’s TCA party, where she was in the company of husband/Shameless actor Steve Howey. When I asked what was said on the pay phone, she answered: “It was another number,” the next in what would apparently be a neverending stream of POIs. “It was Shaw being the solider, back in action again,” Shahi shared. “It was by no means an end. It was another beginning.” If only. 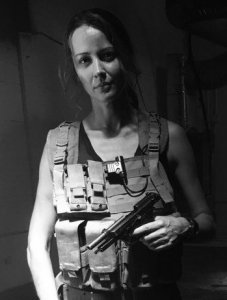 Do you have any extra details on Amy Acker’s MacGyver role? —Maddie
If you caught wind of any of the cynics who interpreted her role to be that of a damsel in distress, rest assured that is not the case. “She does get kidnapped, but she definitely does not need to be rescued,” showrunner Peter M. Lenkov makes clear. As CIA agent Sarah Adler, “She’s a female version of George Eads’ Jack Dalton, and she’s pretty badass!” (Photo: Twitter.com/AmyAcker)

Is Lynn (played by Falling Skies‘ Sarah Carter) going to be back on Hawaii Five-0? —Lisa
As it turns out, she may resurface in the same milestone 150th episode as Christine Lahti’s Doris and Michelle Borth’s Catherine. “We’re trying to get Lynn get in the episode also,” show boss Peter M. Lenkov says. “We’ll hopefully get her back.”

One can’t help but remember that Hyde played a significant role in the Robbie Reyes Ghost Rider comics. Does this mean Kyle MacLachlan could potentially reappear on Agents of S.H.I.E.L.D. as Cal Zabo? — Silje
Presented with your fun fact, co-showrunner Jed Whedon… well, he did what Marvel EPs do. “We can’t say much about what we’re going to do with [Robbie Reyes’] origin, but we are doing our own spin on it,” he said. “We don’t want people who have read the comics to know exactly what’s coming.” Told that viewers surely would like to see MacLachlan back on the show, Whedon concurred, “So would we.” (Then again, someone needs to hold down the fort in Twin Peaks.)

I would love to get any news regarding Jessica Jones Season 2, like when would they start filming? Or what kind of evil can we expect Jessica to fight? —Cecilia
With Luke Cage, Iron Fist and the eight-part The Defenders next in queue at Netflix, Jessica Jones won’t start production on its sophomore run until 2017. As such, little can be revealed about the sad soul (or souls, plural) to follow in Kilgrave’s footsteps. “It’s a work in progress,” showrunner Melissa Rosenberg told me. “The bar was set so freaking high — David Tennant has no equal — so I’m not even trying to go there. The biggest mistake I could make is to try to repeat that. So it will be a very different kind of antagonist… or antagonists.”

Any news on what’s happening with Caitlin on The Flash? —Justin
When asked if Caitlin might have an altered existence because of Flashpoint, EP Todd Helbing hedged, “Yes and no. We’ll say this: She is still Dr. Caitlin Snow.”

Have you heard anything about any other dead characters coming back because of The Flash‘s Flashpoint story? —Dee
Since it’s been revealed that Oliver Queen is among the Arrow characters affected by this tweaked timeline, one must wonder if perhaps Tommy Merlyn is alive and well. “I can’t tell you how many people I’ve talked to about the possibility and how it could possibly happen,” Colin Donnell said when we raised the topic. “It’s not out of the realm of possibility.” Hmmm.

Anything on my summertime (and renewed!) favorite, The Last Ship? —Meghan
When I asked Eric Dane about the synopsis for Episode 10 (airing Aug. 21), in which Chandler receives a “strange order” from the White House, he clarified, “It’s not an strange order. It is a potentially life-changing order.”

RELATED Get Our First Impression on Designated Survivor, Timeless, Pitch and Many More New Fall Shows

What would say are going to be the “must watch” TV shows for the fall? Any show that’ll have watercooler discussion like Lost? —Jason
Lost-caliber watercooler chatter is a high bar to set, but I can see people getting reeled in by the premiere-ending twists of Timeless or This Is Us. Something like ABC’s Designated Survivor, however, probably has longer legs in that respect, chipping away slowly at unlikely POTUS Kiefer Sutherland’s acclimation to the highest office in the land, as well as the deadly conspiracy that landed him there.