USA Network’s Mr. Robot served up both situation comedy — to an uncanny degree — and drama, as Elliot recovered from his brutal beatdown and Angela set out on her mission to hack the FBI.

For the first 17 minutes or so, 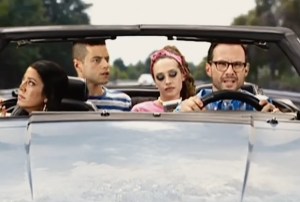 viewers this week got to watch on “America’s Favorite Network” circa the 1980s the wacky (if dark) family sitcom “Mr. Robot,” in which Elliot, Darlene and the ‘rents take a road trip “to a place that makes you better,” Dad tells his son. Again, this family has issues, as evidenced by Mom burning Darlene with a cigarette before slugging her a couple times, while Dad pooh-poohs the fact that someone (Tyrell) is bound-and-gagged in the trunk.

Dearly departed Gideon even puts in an appearance, as a state trooper, before he gets unceremoniously mowed down by a car driven by… Alf. When Elliot protests the body in the trunk et al, Dad urges his son, “It will feel good if you let it. Believing it’s real makes it so.”As Darlene fiddles with her GameBoy (on which we glimpse footage of 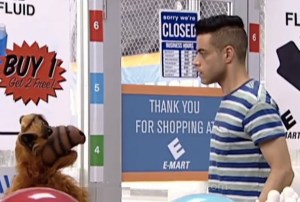 Elliot getting beaten by Ray’s thugs), Dad explains, “Sometimes lies protect you. When the truth is painful, a lie is the only remedy.”

Elliot eventually waves the white flag, telling Mr. Robot, “You’ve won, you’ve taken over” — and yet he is assured that is not the case, at all. As Mr. Robot later explains, back in the real world where Elliot has been yanked out of bed by Ray’s enforcers and lobbed into a dreary hospital cellar, he only took over in this instance to “take punches” for his son. “Now that the worst is behind you,” Dad says, “it’s time we get you back.”

Elsewhere back in the real world, Mobley does his best to teach Angela how to hack in an unacceptably short amount of time, but Darlene has (some) faith that their recruit will be able to pull it off. And indeed, Angela only runs into a couple hiccups when she goes to set up the femtocell station that will allow fsociety access to FBI transmissions. For one, she is intercepted by an Agent Ross, whom she is only able to throw off her scent by responding to his flirtations. Then, when the wifi signal drops out, Angela needs to transcribe some code from Darlene at her desk… which she just barely does before Agent DiPerro — who declined to take the psych leave in the wake of the Chinese hotel shootout — shows up for a chit-chat.

The innovative hour closes with a flashback to young Elliot driving with his father, who discloses that he was terminated from his job for taking too many doctor appointments — because, he confides in only his son, “I’m sick.” They then pull up to the fixer-upper storefront in which Dad plans to open his own computer repair shop, inviting his son/wannabe apprentice to name it as soon as he lays eyes on it.

What did you think of the episode “Master Slave”?